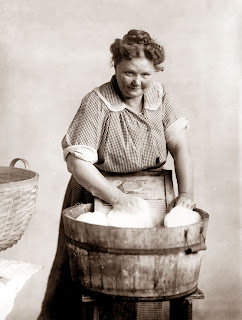 When I was a kid, there was no laundry, there was washing, done in the basement, in the back corner under the basement steps,.  Mom liked help on wash day and we all had a station. 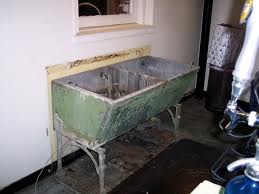 The double concrete set tub was on the back wall.   There was a wooden slatted platform to the right and to the left.  Similar to a packing crate, but lower, and made especially to fit the width of the tub.  The purpose was to keep feet up off the damp floor, which could also have an inch or two of soapy, swirling water when the washing machine drained to the floor drain. 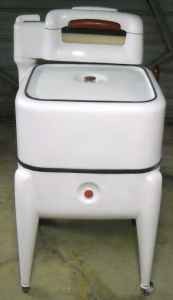 Our washing machine was a Maytag.  I can recall Mom starting out with a hand-me-down washer and replacing it shortly after we moved into Moraine in 1945.  I’ve found one on the internet that is everything I remember, although I don’t remember the reason for the red button about belly button position.  Maybe it was an emergency stop, although Walt once stopped the machine while he investigated its workings.  Maybe the red button disengaged the agitator in a jam.  I just don’t remember.  I’m returning from further down the page.  That may have been the on/off switch.  Pull to start.  Push to stop.  The red bar across the wringer was an emergency release.


The set tubs were on the back wall, under a window.  The window was under the back porch, so it was never opened.  The washing machine sat in front of the left hand tub.  There was a stool in front of the right hand tub.  All the washing was sorted in piles on the basement floor.  Sheets and whites.  Lights, colored and dark.  The drain hose from the washer had a U shaped end and was also the plug—it hung over the edge of the washer tub when the machine was full and in use.  To empty the tub, lift up on the hose and get it on the floor under the set tubs quick, before water spurted around the basement.


The first load into the washer was white or light.  Mom might occasionally add water to the washing machine to make up for what sloshed out, but it was a bad wash day if she had to use a change of water in the machine.  She filled the machine from a hose to the faucet behind the set tubs, put in a measure of soap flakes, turned the machine on and commenced loading clothes.  Then she filled each set tub with water, and waited.


There was an old upholstered chair with wooden arms on the side wall, where she sat while the first load washed. When it was time, she stopped the washer and began putting the clothes through the wringer.  Garments with buttons had to have several folds of cloth over the buttons to protect them.  Walt and I had our stations, me at the left tub and Walt at the right.  When we were little.  I don’t remember boys doing washing as I got older.  Our job was to put our arms in the tub of rinse water and push those clothes up and down.  When Mom had the washer empty of a load she started the next, then swung the wringer head until it was between the set tubs and sent the wash through the wringer to the second rinse tub. Little arms put those clothes up and down in the second tub, then the wringer was put around to the front of that tub and the clothes went through into a basket on the stool.  The baskets of wet laundry were staged under a basement window that opened to the back yard and eventually the baskets went out the window to be hung on the clothes lines.  When I was older, I went upstairs to get that first basket and commence pinning them to the line.


I wasn’t trusted with buttons and the wringer until I was much older.  I remained untrustworthy, and paid in sewing on a lot of buttons.  Walt, Mr. Three Year Old Mechanic, almost stopped Mom’s heart the day he crawled under the washer and stopped the machine.  He grabbed the belt between the motor and the agitator.  It carried his hand right around and when his fingers and the belt went over the agitator shaft, the belt came off.  The machine stopped.  He emerged unscathed.  I was only eight, but I knew a scared mother when I saw one.


Mom was organized and efficient.  “Use your head and save your feet.”  She sometimes ended a long, hard day of washing by stripping down to her undies, putting her work clothes in the wash.  Coming back up the basement steps once she walked right by the open back door and the milkman.


Automatic washers and dryers were popular by the early 1950’s, but mom always had better things to spend money on.  We did not get a TV until she received about the cost of one as an inheritance from her grandmother.  She did not get a washer and dryer until 1970, after I purchased my first Maytag washer and dryer.  Not that her old Maytag washer needed replaced.  She told me she felt bad that Jan had to hang out all that laundry. 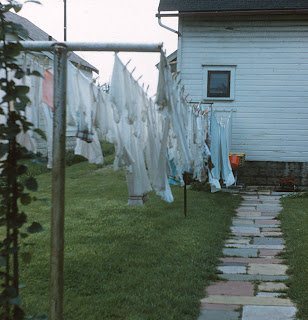 Posted by Joanne Noragon at 8:56 PM