The girls see signs on corners and lamp posts for farmer’s markets, and wonder if we could ever visit one.  I promised them a visit to a real farmer’s market today.  Today we went.

I have a work in progress blog post titled What do you do with a National Park?  I am the “Come Here” who also grew up a few miles from here; I can appreciate the forlorn history of lost farms and still recognize the park is here, make the best of it.

In a nutshell, this was a farming valley.  The Cuyahoga Valley National Park was sprung on the valley, literally in the dead of the night, by John Seiberling and fellow philanthropists who not only had a personal vision of the valley, but could fund congressional and presidential campaigns.

It was a benign, directionless park for several years, until the director, Bill Birdsell conceived the extremely ambitious plan of acquiring the valley’s farms for the park and returning the valley to its agricultural roots.   The acquisition was welcome by those who were willing to sell the family homestead and bitterly contested by those who weren’t.  In the end more than four hundred homes went to the park.
That was about the time we moved here.  We looked up a retired sheep farmer to see about wool. He had none.  The park had approached him to “lease back” his farm and engage in farming, as they saw it.  He was bitter.  “They” had torn down five generations of barns and fences and now they wanted him to put it back together into their vision of a farm!  He spat on the ground.

Mr. Birdsell literally fell in his traces, pushing on.  The next park director spent a career here.  A trifle above the residents of the valley, but with a more benign vision of the valley, under his leadership miles and miles of trails fit for the urbans came into existence.  Many of the buildings that had been acquired decayed and were demolished.  Other farms were refurbished and leased out to what can only be called gentleman farmers.

The director was a farseeing person.  He fostered the large coalitions and conservancies that would buoy up his park, provide resources for park projects.  They are great money machines; I’ve looked at their 940’s.  We have the Conservancy for the CuyahogaNational Park.  It was able to purchase the old Richfield Coliseum, home of the Cleveland Cavalier basketball team for two decades, and bulldoze it to the ground.  Now acres and acres of meadow and wetland.

There is the Cuyahoga Valley Countryside Conservancy.  The Cuyahoga Valley Scenic Railway…in short, the Cuyahoga Valley is a good place to be a non-profit, if it pleases the park and the park’s constituency, which is, on the whole, anyone living outside the valley.  They have no idea how the great underbelly of the park works.  That is the thesis of my unfinished blog post.

In the meantime, Jan and I took Emily and Laura to the Howe Meadow Farmer’s Market, the market produced by the Countryside Conservancy.  The signs at the entrance banned all but service dogs and announced the Conservancy would facilitate any debit card transaction at any stand.

At 9 am, in spite of the drizzle, the meadow was filling.  It is a lovely market, and with only a few captions, the pictures speak for themselves.  I can sum up our support with Jan’s remark, “No matter what kind of dirt they grow it in, three dollars is exorbitant for a head of cabbage.”  It’s really about the booth fee the Conservancy charges for organic weekend farmers to sell produce to residents of surrounding urban areas. 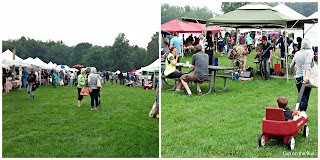 The market and the music 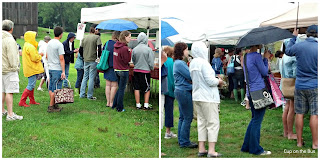 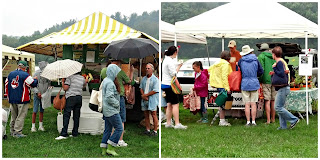 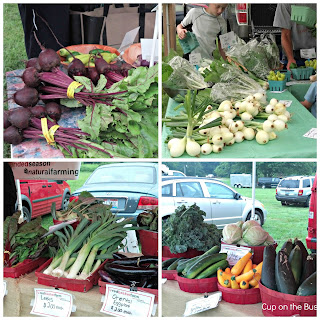 A tiny taste of the offerings