I was thinking of myself, posting yesterday, but not looking for sympathy.  We just play the hands dealt, and they do change from time to time.

Something happened today that will cause me to write a letter.  I’ll practice on you all first.

I live in a community of less fifteen hundred souls, disproportionately adults, most going back five or more generations.  They loathe change.  As a twenty five year resident, I remain, to quote Russell Baker, “Come here, not from here.”  Unfortunately I come here with ideas.

I work at the town hall.  At the time I started, it had been restored by the valiant effort of a committee of citizens and is now leased to various business tenants, the rents funding the upkeep of the building. As it should be.

From the beginning there has been friction between the trustees of my township, who own the building and the land, and the committee which oversees the building as to assignment of some responsibilities, in spite of a lease that defines the duties of each party.

The parking lot is one area of dispute.  Poorly paved, unmarked, parking was helter skelter as occupancy grew.  I fell twice, catching my toe in holes.  I surveyed the building’s tenants; everyone was unhappy with parking.  Other tenants were especially unhappy; they had clients coming to the building.  In fairness to the committee, the “from here’s” who used the lot excused it as “it’s always been that way.”

In fairness to the tenants, it is a professional building, the tenants are attorneys, accountants, architects; they expect marked parking, a finished and graded lot, and especially handicapped parking, the lack of which could cause any one of their clients to be offended and sue them.  In short, we conspired, and we threatened a rent strike if our complaints could not be aired.  I just love a good cause.

A year or two of unpleasantness was required; we got the lots paved and marked.  As the only person who read and understood the Americans with Disabilities Act, and had the most vested interest in handicapped parking, I asked for input on the layout of the ADA parking.  I reviewed the plans, asked that the spot closest to the door be turned ninety degrees, still in compliance, but allowing the driver to leave without backing up.  It was painted to the original configuration.

I use that designated ADA parking space.  I pull in as if it had been painted as I requested.  My car is legally parked, within the marked area, oriented so I can leave without turning my head see to back up, and several steps closer to the door.

Today a member of the committee stopped in my office, sat down, chatted idly for a few minutes.  I have known her since I moved to town; we smile and say hello at the post office or the hardware store.  I waited for the shoe to drop.

Yes, “they” want to know why I park across the marked area, not in the lines.  It appears I am defying them, denying the parking spot to another handicapped driver (????).  It is perceived as unseemly. I will continue to park there, so I wished her good day and smiled her out the door.

Being curious I walked through the building and asked tenants if they were “they.”  It didn’t take long; the building is half vacant due to rising rents and lack of maintenance.  We all had a rousing laugh.   One even pointed out to me that all three employees of the township (I am one) park “illegally.”  The remaining two are the road guys I mention from time to time, together with the word sunflower.  One parks on the diagonal across two spots at the back of the lot.  Like a person who wants to protect his car from other parkers.  The other retains his unmarked spot, identical to mine, but at the back of the lot.  Neither of us wants to back out, apparently.

In my survey of tenants today, it was also pointed out that the other two employees who park “outside the lines” are “from here”.  But mentioning that would only be petty.  I doubt I will ever be "from here." 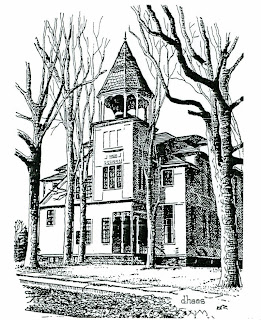 Posted by Joanne Noragon at 2:06 PM