This explains the name of my blog:


No cup on the bus


Being a self employed artist/artisan didn’t land us among the Fortune 500, but it’s good, hard, honest work.  It can yield some tough financial situations that probably don’t happen as often to people with “real” jobs.  One biggie, of course, is the house payment due in two weeks and it’s not quite in hand.  In the retail business (and we were in the retail business), funds can be especially tight in the spring.  A few years in the business, or a good line of credit, and we can weather the spring in anticipation of a good selling season.  Before we got there we had to scrabble a couple of times, book a show at the last minute in search of the last of the money.  I remember paying the turnpike tolls across Pennsylvania with the change from Jan and Tom’s euchre bag, but came home with what we needed!


Another time I booked the craft section of a home and garden show in Michigan.  Just to underscore, these are the kinds of shows that you stand in the aisle on the fourth day and say “May God strike me dead if I ever do this again!”    Other exhibitors might be thinking they’d never do that show again, but I was also thinking I’d figure out how to get a year’s worth of house payments in the bank.


Home and garden shows generally run the best part of a week, and the hours are brutal.  Ten in the morning to ten at night.  Precious little traffic for the first five days.  I took my spinning wheel to pass the time when I was at a show like that. 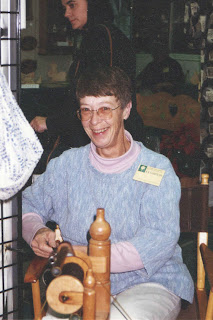 So, I was in Michigan, at a home and garden show.  My booth was a corner, first one in line at the craft show after leaving the floor of the home and garden show.  There were telephone booths I could see just inside the main hall, and at the end of the first day some kitchen gadget in a box was left on the shelf at one of the phone booths.  The gadget in a box sat on the shelf Tuesday, Wednesday, Thursday, Friday, Saturday.  Saturday night, on the way out, I said to myself “Obviously no one is coming back for this; I’ll just take it home.”  And I put it in my bag.


That coffee cup was a Hotjo brand.  Nice broad bottom with a rubber coating.  Sat right on the console of the van and didn’t move an inch.  Had a plug to keep coffee from spilling.  Nice cup.  When I got to my booth I realized I’d left it on the bus.  Back out in a flash, I met the bus bringing the next load of exhibitors.  No one had turned it in.  It wasn’t there.  But, there were two busses shuttling.  I waited for the next bus.  No cup.  I knew it was karma.  The kitchen gadget was packed up in my suitcase, in my van, miles away.  The shuttles were done running.  I paid the price.


At home I offered the gadget to Jan.  “I shouldn’t have taken it, but I did, and my cup wasn’t on the bus.”  She wouldn’t take it.  So, I gave it to someone without the confession.  Ever since then, if it looks iffy, we’re bound to say “If you do that your cup won’t be on the bus.”


On the other hand, twenty odd years later, I find almost always my cup is on the bus.  Thank you, universe.


And, a little “your cup won’t be on the bus” story from my daughter, who owns a restaurant.  She likes to use little Dutch windmill salt and pepper mills on her tables.  One night a server followed a couple out of the restaurant, attempting to say “Oh, excuse me, madam, but I believe our salt and pepper mill fell into your purse.”  The server screeched up short behind the couple, who were surveying the hit and run damage to the side of their car.  The server came back in and told Beth, “Their cup sure wasn’t on the bus.”