It has rained for seventeen days; we are under flood watches.  The length of this weather pattern and the amount of rain is unequaled since records were begun in the nineteenth century.  Although the temps are high eighties, it is so humid we might as well be breaking heat records, too.

A couple of weeks ago my daughter Beth called.  She was “on the road’, on the way to a catering job for an outdoor party.  She was laughing.  Like mother like daughter; she was about to spend a hot afternoon under a tent, serving people.  I let her have her joke; even if it was only one afternoon, and she was actually serving whatever her fine restaurant cooked up.  The memory counts.

Today I really am smiling.  I put my granddaughter on the bus to help Linda at State College for a very long weekend at the Central Pennsylvania Festival of the Arts.

My day began at 6:30, to take Hamilton to St. Thomas for an all day volunteer stint. I doubt I got up that early when I had a “real job” back in the 1980’s.  We made the twenty minute trip in total silence and in the down pouring rain.

Back home, rain over, I picked up Emily and her luggage for the hundred mile drive to Linda’s.  She has been to art fairs, and now she would be on the other side, working for Linda.  She’s in for a long, hard weekend, but she’s up to it. A strong little girl with boundless energy.  This is a physically exhausting show; good for Emily to volunteer to be the roadie.

Emily and Linda were so eager to get in that van and go I have no pictures of them leaving.  I took pictures of Alberta’s phenomenal garden instead.  Alberta is Linda’s ninety six year old mother who will not be without a garden.  Every year Linda tells her it will be too much work; every summer Alberta has a garden. I came home with a bag of kale.

Having seen Emily off, back home, a stop at work to finish up for tonight’s board meeting.  Home for a nap, set my alarm to get up and go for Hamilton.  This afternoon’s storm was worse than last night.  The trip to St. Thomas was a lesson in driving that most were passing.  The roads ran curb high in water, many traffic lights were out, sending traffic back to the old four way stop rules, which most were obeying. I hoped I would not stall my car when I had to use the curb lane and turn against the current to turn into St. Thomas, then cross the flood again to get out.  Wipers on high could not keep the windshield clear.

Of course the rain stopped, but all the way to the town hall for tonight’s meeting, and all the way home after I could hear running water.  The lakes are over their banks; water is running across roads; the river is close to spilling into the flood plain.

But the entire weekend at State College is forecast to be beautiful.  That is a relief, as I sent Emily with her brother’s phone, and mine has the storm shield application. It just signaled another flood warning, saying today's five inches of rain really has no place to go.  So glad I live on top of the hill. 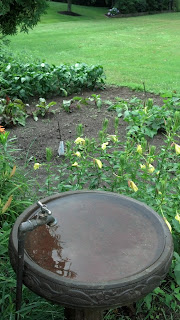 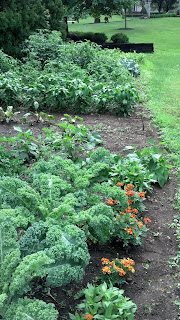 Posted by Joanne Noragon at 9:05 PM