A good bed can win a war

Early on in our weaving career Jan and I tried different venues, experimenting on a fit in the fair world. Some of the shows were short on cash but long on stories.

One such show, the name I do not recall, was held in the Carillon Historical Park in Dayton, Ohio.  It was an outdoor show of no great renown, themed generally around a reenactment outfit that hosted a trading post.  I recall we were approached to exhibit because we often demonstrated spinning and offered some handspun, hand knit sweaters and hats and mittens.

The reenactors were American and British Revolutionary War soldiers.  And camp followers.  I remember little about the battles, which were held at regularly scheduled times.  A cannon was fired frequently.  The people who came to see battles reenacted were not much interested in a fair, and there was sparse traffic through the show.

For this post I did some research to find Ohio reenactor groups and some Revolutionary War moment that could realistically be staged in Dayton, Ohio.   As we all know, that war was conducted east of the Appalachians, although there were lots of British militia about in that whole lead up, the French and Indian War. My cursory research turned up little, so I have nothing of interest to add about the history reenacted.

It was a mighty cold weekend and although regular patrons were few, we did business with reenactors with cold children.  Our stock of children’s sweaters and mittens was wiped out by Saturday afternoon.  Before the show closed that night one young reenactor came in carrying a minute toddler, Willow, about eighteen months old.

The sweaters all were sold and there seemed to be nothing suitable to keep the baby warmer.  Then Willow’s mother spotted the dish towels and bought a dogwood flower overshot towel as an extra blanket overnight for the baby.

Sunday morning was too cold to be outdoors, unless there was a booth to open or a battle to reenact.  We wandered over to the encampment early, to check up on Willow.  We met a British officer and his wife emerging from their tent, and, of course, remarked we were grateful for the real, warm beds we’d enjoyed overnight.

The officer and his lady exchanged glances, then invited us into their tent. A canvass wall divided the front and back of the interior.  The officer drew the wall apart and showed us their primitive bed, with rope underpinnings, and an obviously modern box spring and mattress under the coverlet.  The secret to their success.

We found Willow, warm and toasty, and wearing her new towel as a cape.  We've seen Willow and her mother several times over the years, and at last meeting Willow still had her dogwood towel.  Not surprising, the towels in our kitchen drawer are upwards of thirty years old. 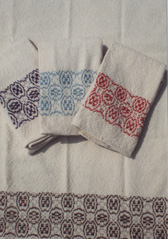