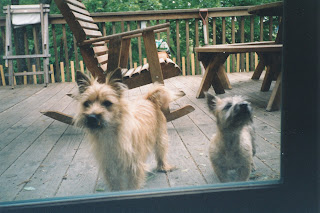 Angus and Fiona were once in a lifetime dogs.  After little Poppy II, the Yorkie, we didn’t have a dog for a awhile.  It transpired Jan was researching, and settled on a Cairn. She followed up on a newspaper classified and found Angus and his littermates living in a cage in a strip mall hairdresser shop.  With hairdresser kids tormenting them.  She sat down on the floor with the lot and studied them for some time.  Then she picked Angus.


None of us are dog behavior experts.  As when dog does this, human does that.  Somehow we’ve muddled through it, together with a little coaching from our dog rescue friends, Ann and Pat.  Angus was three or four months when he came home.  House training was an exercise in overcoming his extreme separation anxiety.  He stuck to Jan so fiercely he had no time to stop and do doggie business.  But, stuck to Jan, he never got into any trouble on the side.  Almost like the first kid.  Be quiet.  Look around.  See how it’s done and then make them proud.


Well, scratch the quiet part.  He loved the weavers and the sewers who came to the studio.  He greeted each at the door with HAR-rrrooouuuu, and escorted them to loom or sewing machine.  He was always up for a biscuit from the jar and sat on his hiney to let you know.  “Like a Teddy Bear,” Tom said.  He had that Cairn lilt to his walk and tilt to his head.  Then those big brown eyes…..


Angie was so used to getting his biscuit at the bank drive through we almost lost him in the New York Thruway booth the first year we went to Syracuse to Linda’s for New Year.  Hi!  I’m Angus!  You know me!  Why isn’t there a biscuit for me?  To anyone in the car:  She must be new.  Set her straight.


He was little that first time to Linda’s, not a year.  Angus and Tom sat in the living room watching football.  Then Angus disappeared.  He’d followed his nose to the pot of venison chili and struck up a lasting relationship in the kitchen with Linda.  It didn’t hurt that Linda ate anise cookies in bed at night and Angie’s nose took him there, too. 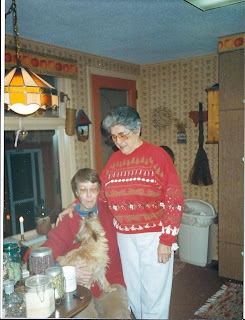 Alberta, Joanne and Angus at Linda's, 1999
Fiona arrived a year later, to keep Angus company.  Jan wanted another Scott name and I suggested Fiona.  “Not if you call her Fi-Fi!”  That never crossed my mind.  Tom and I always called her Flony, or Fony.  She didn’t care.  She looked up with her big Betty Davis eyes and wiggled.  She was energy on wheels.  Trouble, too.  She chewed every table leg and a hole in the back door.  But we got over it.


Flony went to Syracuse, the next New Year’s Eve.  Together she and Angus converted Alberta, who doesn’t quite like her own daughter’s dogs, but brags on those two little dogs “who know what you tell them and DO IT.”  That because at meal time Tom would say “Get in the room” and the two little beggars would retreat to the dining room entrance and lie there with noses on paws extended less than 1/16” into the dining room.  “Bring the ball” was another example of their post graduate education for Alberta, but to Fiona was her end of keeping the human tossing it.  She really got Alberta with the game of rolling the ball down the steps for the human to throw up to be caught at the top and rolled down again. 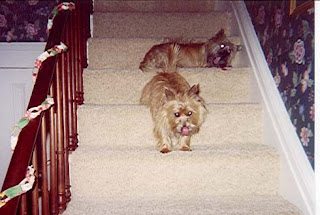 The stair games at Linda's
Angus was the best big brother.  He let Fiona get to the ball first, almost every time.  If he picked it up and stood on four legs with the ball in his mouth Fiona would feint and dart, snatching the ball from under his whiskers the instant he slackened his jaw.  Angus was so fond of Fiona he took her to the kitchen in Syracuse to make friends with Linda and venison, and then upstairs in the middle of the night when he heard anise cookie crumbs falling onto a bed. He knew the toll lady was too cheap to hand over biscuits and told Fiona, We don’t bother ourselves for her. 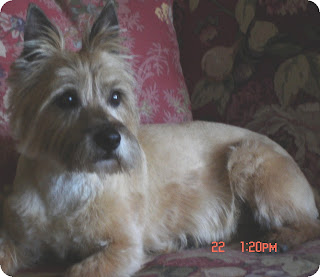 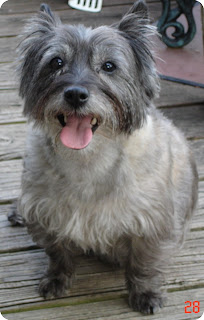