Christmas gifts were not the big deal in my house when I grew up.  The day after Christmas we probably sported a new pair of boots, and we definitely had new underwear.  I do remember getting a wastebasket for my bedroom one year. A pretty green metal wastebasket, with open work around the top.   At Christmas the joint children toys such as Lincoln logs, Lego’s and the erector set appeared.  And one year I asked for and received a mohair sweater.  I was about fifteen.


We prepared for Christmas.  We put up the decorations and Mom baked cookies.  We didn’t anticipate the holiday for the excitement of gifts, but for spending the day with one set of cousins or another and having a wonderful meal with bits contributed by all the mothers, aunts and grandmothers.  One year Aunt Flo’s dessert included squares of vanilla ice cream with green trees in the center.  We could hardly believe it.


All the women in the kitchen distributed jobs among themselves.  Aunt Flo’s mother, Grandma Froelich, always shook the aluminum can with water and flour to make gravy because she was proclaimed the only one who could produce lumpless gravy.  Grandma Cox always made yeast rolls that pulled apart in three sections.  If we were at Aunt Helen Rita’s, dinner included wild game.  If we were at Aunt Laura’s, Uncle Frank played the organ.  And we kids did our best job, too.  We played.


Things changed a little my sister arrived, ten years after me.  If Christmas was becoming more commercial, we three older children didn’t notice.  I do recall my mom saying she’d never go downtown on the Friday after Thanksgiving as it was a “madhouse,” but I had no idea why.  Our change was a baby in the house.  Babe, as we called her, right up to that day she stopped in the middle of a supermarket aisle and said to my brothers and three aisles on each side of her, “Don’t call me Babe any more.” 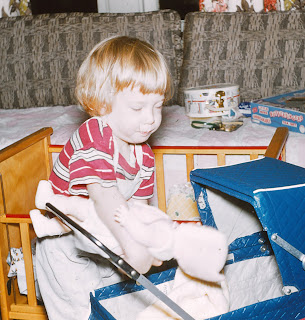 
I have no recollection of Santa bringing these gifts to Jan.  And, neither does she.  Our brother Walt tells the best Christmas story on her.  We guess she was perhaps five, and came downstairs when she knew she heard Santa.  She woke her brothers, who slept down there.  Melvin told her to go back to bed, but she only made it to the living room, where she sat down to wait for everyone to get up. 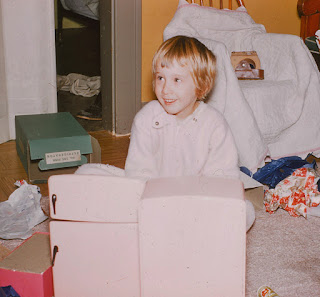 Jan - 1956 (Noteworthy jammies)
She was found in the morning, sound asleep in the red chair, right next to a doll as big as she.  Until the family woke her, neither knew the other was there.  Jan tells me she loved that doll and remembers her shoes fit her best friends’ little sister.


I can’t believe my Christmases were significantly different from the usual.  Our parents were children of the Depression and survivors of a great war.  There probably were no memorable holidays for my dad.  My mother’s memories were of family and friends and token gifts to acknowledge both.  Mom carried on exactly as she had before marriage, and those comfortable traditions surely pleased dad.  Our Christmases were never about the gifts, but family and food.  It was a warm, good, fun day.

Posted by Joanne Noragon at 2:26 PM