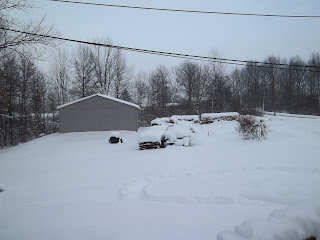 My brother’s first wife was the trophy wife.  She remained in this country for several years after they divorced, until a series of hardships caused Hazel to make the decision to return to her village in England.  We kept in touch and knew she married a man she met at a rock and roll club.  A Teddy Boy.  Hazel was a nursing assistant and Bill the town gardener.


It was just another late fall evening in our house when Mom answered the phone.  It was Hazel, who had an awkward question to put to us.  She and Bill wanted to come here to visit her boys and could they put up at our house.  She’d understand if we said No, but it never hurts to ask and would be so helpful……Mom put the question to Jan and me and Hazel heard us holler YES in unison.


They arrived in December and Mark and I picked them up at the airport.  Same old Hazel, and who couldn’t like Bill.  Well, nobody.  Between them he and Tom knew every song, singer and group from 1950 to present.  Mates, as Bill said.  Walt and Bill went shopping for tools for Bill.  Mom went with Bill and Hazel to see her two boys in Virginia.  On the way back Mom went eastbound on the Pennsylvania turnpike.  The signs strangely kept saying fewer and fewer miles to Philadelphia.  How silly.  Until they realized they had driven long enough to be in Ohio.  It was a long day, and the very next day home Mom bought a compass for every car in the family.


We had lots of company in to visit.  Uncle Hank kept looking around the table one night and beaming.  Who could believe it.   Former husband.  Present husband.  Former in-laws.  All present company.  And Bill was a keeper.


When she wasn’t off visiting, Hazel tucked into odd jobs in the studio and Bill puttered about until his mate, Tom came home from work.  The weather was very mild for December when they first arrived and Bill did a lot of yard puttering.  It was well trimmed and raked those several weeks.  He looked for odd jobs about the house and kept the studio hearth swept and the ashes carried out.  Very late one night I woke up to a lot of commotion in the side yard and bright flames.  The commotion was Jan and Tom returning home from bowling, looking for the garden hose Bill had stowed neatly, turning the water back on.  The compost bin was in full flame, probably from a smoldering coal still in the ash bucket.  The bowlers put out the fire.  Bill never woke up.


Near the end of the visit it began snowing.  Inches and inches, topping out at over a two foot accumulation in a short time.  Bill had his taste of winter weather and could go home happy, and telling about shoveling feet of snow off the porch and sidewalk. Only one thing left on his wish list.  A ride in his mates'  lorry.   Tom was an over the road trucker back in the days before he retired.  Bill sighed and asked about Tom’s day when Tom came home.  We knew what he wanted, but it would be so against the rules, he didn’t ask.  After he heard about every delivery, every loading dock backed into and pulled out of, every shift of all twenty gears, a long sigh.  At the end of the last week, on Thursday night Tom asked “Can you be under the light at the head of the street at 6 am tomorrow morning?"  “Right, mate!”


And the next morning the little man went up the street, outfitted in the winter gear we had cobbled together a week earlier.  An old coat of mom’s, a muffler, some mittens, a stocking cap and my pink, puffy, knee high boots.  He had a glorious day.


Hazel and Bill visited several times over the next decade.  When he was back in our kitchen we realized how we missed “Aizel, where’s my tay?”  “Bugger.”   Our yard was never so well tended as the weeks he was here.  Bill built our grape arbor and planted the grapes.  I still have his card:  Bill’s Lawn Mowing Service.  Our trophy sister-in-law had a trophy husband.  One night Jan and I came home to find Hazel on our answering machine.  Bill had died that morning of a heart attack.  We lost a good friend and a great gardener.  Aizel gave him a Teddy Boy send off.
Posted by Joanne Noragon at 4:21 PM