When I went to school starting in the forties (uphill both ways), there wasn’t the load of homework that currently comes home.   When I had grade school grandchildren living here I checked workbook assignments I know I completed at my desk in grades one through six.  Sadly, I learned new math together with Bekka.  So, when I think back to Forest Hill Elementary School, I cannot make a connection between school and home.  Until my brother Walt came to the end of second grade.


Second grade.  I had Miss Millani. She was so slim and pretty and sometimes stood in the hall and talked to Mrs. Schultz while we did our workbook assignments. My favorite library book was The Brave Little Pig.   My brother Walt was in kindergarten when I was in second grade.


Walt was always pretty easy going.  He used to sit under the dining room table and play an afternoon away.  When he went to school I was one of the big kids who had to be sure he didn’t get lost on the way.  If we passed a city crew repairing a sewer on the way to school, all the tugging in the world wouldn’t budge him.  I’d finally throw his hand down and stomp on without him, leaving him for mom to find when school reported him missing, again.


I finished up fourth grade and the multiplication tables when Walt finished second grade with Miss Millani.  For the first time I realized there was a link between school and home.  Mom was angry.  At the end of the school year Miss Millani told mom, “Walter cannot read.”  Mom’s anger penetrated my ten year old world.  “Eight years old and they tell me!  They knew when he was six years old!  They knew when he was seven years old!  Eight years old!  No one can be bothered.  No one told me.”  She was HOT.


That summer Walt had a tutor, and it was mom.  She discovered he read words backwards and consequently could make no sense of them.  I have no idea what tricks, tips and methods she employed, but by the end of the summer Walt read with comprehension.  Twenty years later dyslexia was identified and children are helped right in the classroom.  Mom just took the bull by the horns.  I think of it as the summer two heads were bent over one book.


I don’t recall ever asking for help with school work.  I was one of those who got by with minimal effort and made it look good.  Shame on me, but that’s what I did back then.  Asking for help didn’t cross my mind the time my twelfth grade English teacher passed out a list of 100 great American novels and their authors.  There will be a quiz tomorrow. Where does one get help for a problem like that. That list was an exercise in memorization as opposed to learning.  I knew two thirds of the books and authors, but I also knew I was doomed.  I stood at the ironing board that afternoon, working on the week’s ironing, that damn list up there at the end where the shirt yoke has to go to be pressed, and probably muttering as well as iron thumping.


Mom looked over my shoulder and asked the nature of the list.  I explained.  She took it over to the sofa and examined it.  She quizzed me from the top.  She picked up her dress marking pencil and ticked off the ones I missed.  “OK,” she said.  “Now remember these:  Sister Carried her clothes to the Dreiser.  The Rise of Silas Lapham, and on the way up he Howells.”  We both laughed and came up with combinations.  I won’t even tell you how Willa Cather and Death comes for the Archbishop are linked.  My mom had just finished reading Dale Carnegie, and I got 100 on the quiz.  Another A in English.  My brother worked much harder for his English skills, but mom got us through. 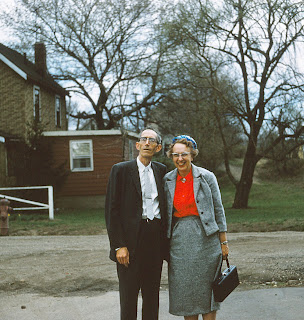 Mom and Dad when I was in high school

Posted by Joanne Noragon at 4:20 PM