Angus and Fiona hang out

In the beginning Angus’ separation anxiety was heart rending.  He would not be separated from Jan.  He was a lucky dog; Jan worked from home and he was seldom separated.  We were lucky people; because he needed to know where we were at all times, he never ran away.  Tom taught him the boundaries of the yard in one evening and that was that.  Even when the groundhog popped out from the culvert under the drive.  That was a game.  The groundhog knew Angus knew where he had to stop.  So, Angie wore a path across the lawn and pounded a hard dirt path in his skid down the hill to the culvert, where he braked and stopped on a dime while the groundhog hurried through the pipe and came out the other end.  On someone else’s property.  Flipped Angie off and ambled down the road.


Fiona was the brains of the pair.  She would have been the alpha dog except for the unfortunate fact of showing up second.  She grasped almost from the outset that terrier antics such as running off didn’t happen in Angie’s house.  In fact she did run once, for a half mile through the woods to the next street and terrorized herself so that when someone brought her back she admitted her mistake and never repeated it.  Running alone was scary and stupid, when you could run up the street with Mom every morning to Uncle Skip’s or Uncle Joe’s, accompanied by all the cats, get a biscuit from Uncle Joe and an amble around Uncle Skip’s field.


Tom and Jan went to Canton one weekend to visit Tommy T.  They took Angie and Fiona, who were always up for a ride.  At Tommy’s house they left the two in the back yard with Tommy’s dog, and went to see a ball game.  Coming back up the street hours later they could see the gate was open and there were no dogs in the back yard.  Tommy was beside himself.  Bad enough his dog, but his dad’s dogs too!  Jan suggested they not worry until they had to.  They pulled in the drive and saw Angus on the back porch.  They walked around the house and found Fiona on the front porch.  Jan figures Fiona went around to the front door because it was the last door she saw them go through.  Dogs and all, they piled back in the car and went looking for Tommy T’s dog.  When he hopped in, blocks and blocks later, Angie and Fiona gave him what for. 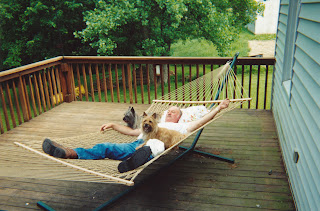