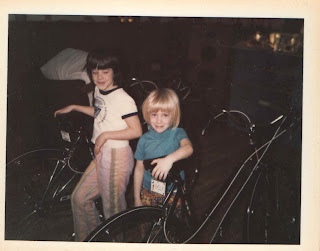 My girls got bikes for Christmas one year.  Their dad dragged the boxes into the basement on Christmas Eve, told me he had bikes for the girls and we needed to put them together.  He found them on sale somewhere in the midst of his Christmas Eve shopping.


I don’t recall if the girls were four and six that year, or five and seven.  Both bikes were standard size and had hand brakes.  Both bikes stayed in the garage until spring, but Shelly hadn’t grown much more in those two or three months.  She’s just the short one, finally topping out about five feet two.  At least her head came up to the handlebars.
We imparted bike riding knowledge to the kids.  They all figure it out, anyway.  It was a vertical challenge for Shelly; she always was way too short for that bike.  To get on it she stepped one leg through, balanced with one hand on the mail box of whatever neighbor’s house she was near, stood on one pedal then the other and took off, not getting up on the seat until she had a good start.  To dismount she slowed down and when she judged it safe swung both legs to one side and jumped, holding the bike by one handlebar.  The jump, often as not, was a soft landing onto some neighborhood lawn with the bike across her back.
Speed entranced Shelly.  Our street was long and straight, lovely concrete.  She often passed the front window pedaling fast, yelling with excitement, her yellow hair streaming straight out behind her.  One day one of the neighbors up the street called me. She wanted me to know that as my daughter sped down the street, yellow hair flying, she was yelling at full throat “mother f*r.”  She thought I’d like to know.
I asked my husband what he might say when he was driving with Shelly in front on the motor cycle.  He didn’t know.  Any chance of using a phrase not generally associated with the mouths of four year olds?  Might be.  He got the job of telling her why neither of them would be saying that again.  Shelly gave it up.
Posted by Joanne Noragon at 2:53 PM