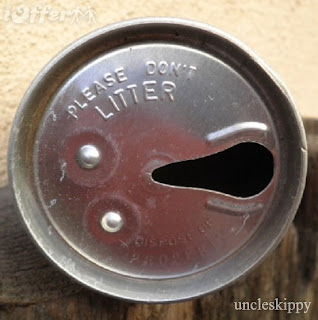 Litter was less of a problem in my youth.  Perhaps there were fewer cars to toss from, and certainly no fast food wrappers to toss.  Kids scoured the sides of streets for pop bottles to turn in for two cents and leave with an afternoon of candy.  I remember my dad remarking on the cleanliness of English streets, parks and sidewalks when he visited, but I also can’t recall an appreciable amount of litter around me in my homeland.  When I was in college a friend routinely threw trash on the ground, explaining her motive was economic.  Someone had to be employed to pick it up, therefore she was contributing to the economy.  I could never square the moral principal with her economic theory and saved my candy wrappers for the corner trash bins.  On the whole, litter was a non issue.


Then mother discovered recycling in the 1980’s.  She was a selective recycler.  She chose aluminum cans.  As there were no aluminum cans in her house, she had to pick them up along the road.  Perhaps Lady Bird Johnson keeping America beautiful sparked her imagination.  Perhaps it was finding an aluminum recycling station a mile from home, where her trunk load of aluminum cans could be exchanged for silver, and even folding stuff.  Mother did not need the money.  Mother was on a mission, and the money was an adjunct.  Even at a dollar a gallon, I wonder if it covered her gas.  She considered herself too practical to set out just for cans, so the picking had to be part of a larger errand.


I asked Jan about the events of the final chapter of can collecting, which she supplied in detail, and had a couple more details of the opening chapter in Tennessee.  Jan and Tom, Mom and I went to Tennessee to attend a friend’s wedding.  Way up a mountain, down a holler, and up a bumpy road, past grandpap’s.  Mom was beside herself at the can bonanza overflowing the ditches.  Jan, Tom and I absolutely refused to be involved, so Mom went off alone to pick up cans.  She made so many trips her trunk overflowed and she transferred her loot to Tom’s pick up.  Then the mother of the bride saw the back end of the truck overflowing with empty beer cans.  Shirley was a founding member of the little foursquare bedrock church down at the fork, and beside herself thinking about wedding guests parking by a pickup full of beer cans.  The father of the bride cast an appraising eye over the loot and told mom that most of those cans were steel and would not fool an aluminum recycling station.  Bob did show her how to tell the aluminum from the steel, so mom spent an afternoon sorting.    Shirley would not allow the steel beer cans to be left at her house to go to the dump, so mom worked out a deal with grandpap.  Tom parked his pick up down in the field on the day of the wedding.


As time went on mother became even more efficient in collecting cans.  She used grandkids.  There was no penny ante collection, either.  They gleaned highways.  State Route 224, on the way to Aunt Helen Rita’s.  Imagine a big, blue Dodge Polaris, emergency blinkers blinking, slowly creeping down the berm of a state highway while five or six children walked the grass and filled bags with cans.  State Route 21 on the way to Aunt Laura’s could provide passing motorists the same scene.  This was such a normal afternoon with grandma that my girls didn’t mention it until it became a postscript to the final can chapter.


Eventually the bulk of the grandkids grew up, went to college, joined the service, got jobs.  Jan sized it up and decided it was time for mom to get out of the can business.  She was out of grandkids who were close to the ground.  “No more cans, Mom.”  Of course, mom refused.  The final deal was, no more cans unless Jan went with her.  Mom was in her late sixties, and a pretty spry woman, but getting in and out, stooping, bending, walking down the road and back cut into her recycle pounds when she was on her own.  That was Jan’s convincing argument; she didn’t have to play the dangerous card.  So, trips to collect cans dwindled until mom couldn’t stand it and wheedled another ride from Jan.


She got Jan to agree to a can trip one great summer afternoon, and selected Ira Road, down in the Cuyahoga Valley.  Like all the roads that climb out of the valley, it goes up a hill and has a number of twists.  Jan’s instructions were to leave mom at the bottom, go up around the first bend, turn around and commence collecting downhill on the opposite side.  Jan went up the hill, around the bend, turned around, back around the bend…..and she saw mom sitting on the tailgate of a station wagon.  Jan wasn’t even up the hill when mom slipped in the gravel, fell, broke her ankle.  In fact, the station wagon folks saw Jan let her mother out of the car and drive off, leaving the poor woman to walk up the hill on her own and she tripped and fell!  Jan never got a word in edgewise as the irate couple berated her.  With clenched teeth and lips, she helped mom into the car and drove her straight to Akron General, and waited several hours for the ankle to be set.


But wait.  There’s more.  Returning home Jan pulled onto the front lawn in order for mom to use the front door and avoid the long walk up the sidewalk.  “Wait for me to come around and help you.”  “I can manage these crutches just fine!”  And mom fell flat on her face.  Jan got her up, in the house, into a chair and said “You will listen to me until this is over or you’re going to a nursing home to recover!”  Listening pretty much happened, although mom never forgot the threat of the nursing home.  But that’s another story.

Posted by Joanne Noragon at 5:42 PM