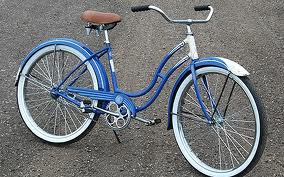 CUV’s—childhood utility vehicles.  We rode them far and wide.  Places we should be, places we shouldn’t.  I was eight when the mystery of the box behind the chair in the basement was revealed on my birthday. My mom told me she got her first bike at age 18; she was employed and bought it herself.  I have no idea where she rode it.  We rode ours everywhere.


I don’t remember the actual presentation of my Schwinn.  My ever practical parents may have sent me to the garage to discover it.  That’s where we kept them; dad built a bike rack.  In the summer the almost nightly question, “Did you put your bike away?” could result in “Um, no, I’ll go do it,” and a hasty trip up the street to retrieve the bike from behind some garage.


I totally recall learning to ride my bike.  It probably was the very day.  It was cold, I had on a sweater.  Mom and I set out from our front drive; Moraine was level, as opposed to Gardendale going up hill.  Our residential street was not paved by the city during my tenure.  There was some squabble with the city as to the streets’ status.  Akron claimed it was a private road and they didn’t even plow it.  Consequently the potholes deterred any attempt at speed by an automobile and kids on bikes ruled the road.  After they learned how to navigate the holes and ruts.


Mom held the rear end of the bike in the time honored fashion and I wobbled past my house, past the neighbor’s house, past the vacant lot.   I wobbled right and turned into the drive of our next neighbor.  The drive went uphill, I pedaled hard.  I wobbled right again and was on the path through the vacant lot.  The bike picked up speed, I was not in control.  The wind was in my face, my head buzzed, my vision blurred.  I heard Mom saying “You’re doing fine,” and saw her down on the road.  I realized she had let go long ago.  I realized I was a bike rider!


In retrospect, although we rode our bikes everywhere, we never rode them to school.  I don’t know if we suggested and were denied, or if riding to school was just not done.  There was a bike rack at our elementary school, but it only held bikes after school and during the summer, when we went to play on the equipment.  I also remember we were older than grade school when we did that.  It was half a mile to our grade school, a mile to the high school and 1.999 miles to junior high.  The statute specified a two mile distance to require a bus; there were no school buses in Akron when I was a kid.  Bicycles on those busy streets would have been deadly.  We jaywalked Tallmadge Avenue as it was, to avoid a block to the light and a block back to the school.


The grade on Gardendale was serious.  In the winter cars that came out of drives part way up the hill generally went down first, turned around on our blacktop and got a running start.  A serious hill that requiring serious attention.  I was a cautious kid; I used brakes on that hill.  My brother Mel pre learned his motor cycle skills on that hill, even knocking himself unconscious in one misjudgment of gravel, turning radius and speed.  My poor little sister was sent up the hill at six or seven years of age by two big brothers who failed to give adequate advice.  She came flying down, made the turn onto the blacktop, went straight through the grape arbor and crashed in the garden.  Walt was heartsick.  Mel probably thought it was good training.
Posted by Joanne Noragon at 12:53 PM