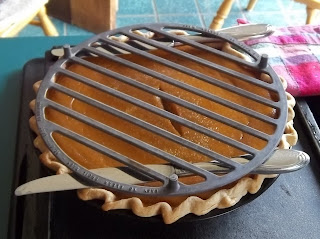 Thanksgiving’s been creeping in all week.  Three evenings in a row Jan baked a loaf of bread, let it cool a bit, then sliced it into cubes to dry out for stuffing.  Occasionally we’d find a cube on the floor.  No one fessed up to being careless, but when Toby came sliding around the living room corner after his bread cube, we had the culprit.


Counter cats are absolutely not permitted in this house.  Cats being cats, we also keep the counter free of cat attractions.  Purrl and Ryon still make the occasional foray, maybe they left something in the sink strainer, let’s just check.  Neither one is a stealth cat; someone hears the counter thump and hollers “Purrl, you better not be on the counter if you know what’s good for you,” followed by the thump down and a cat stroll into the living room, you were talking to me?


So, a kitten who thinks we keep toys on the counter. But we couldn’t catch him to give him what for. Until one afternoon I heard a loud thump, investigated and found Toby commencing to investigate the zip lock baggie of frozen chicken he had transferred to the floor.  Down the slippery slope in only a day; bread cubes led straight to chicken!  I had him full to rights, snatched the baggie and delivered a clip on the nose with frozen breasts.  He looked at me.  What did you do that for?  He didn’t run, he didn’t cower, he just wanted to know.  Getting no answer he left,  insulted.


Yesterday’s bang on the tile featured Toby with frozen cube steaks held high, another prize from up there.  These may slide across the floor quicker than bread cubes!  Another snatch, another nose clip, another insulted rebuttal:  What’s your problem?


In two days we have learned to defrost dinner in the fridge and store drying stuffing in the oven.  But now the pies are coming down the line.  Do we lock up the little mister kitty charm.  Of course not.  Jan put the pie in jail.  And, she cleared the cupboard over the fridge to store them overnight. 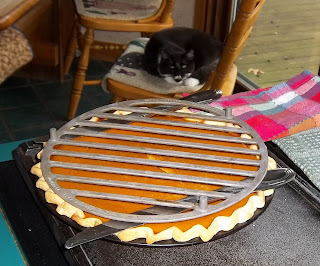