When I was little the family gathering often was at Grandma and Grandpa Cox’s house.  Grandma Cox was Grandma Rolf’s step mother and Grandpa Cox was her father.  They lived on Selzer Avenue in Cleveland’s west side.  It was a two story house, on the corner, and the upstairs was rented, with a separate outside entry.  Behind a chair in the living room was a door that was the inside stairway to the upstairs. Grandma Cox kept her Hoover and cleaning supplies behind that door.


The house was a long rectangle.  The front porch ran along outside the front room, the parlor.  There was no sitting on the porch, it was just the way to the front door.  After the parlor there was a living room, then a dining room, then the kitchen.  Each room was the same length.  There were two bedrooms off the living room and a bathroom off the dining room.  The kitchen was wide; it had no additional room carved out. There was a  door out the side of the kitchen that opened into the wood/coal shed. 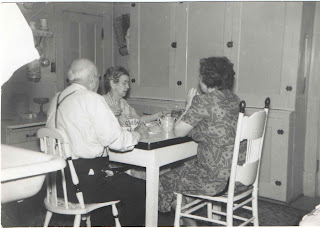 The back door out of the kitchen led into a tiny, magical garden.  It may have been thirty feet by twenty  feet, enclosed on all sides.  I don’t remember any exit to the street, but there must have been a gate.  There was a brick walk way that formed a circle in the yard.  The entire outside of the circle was filled with flowers.  The inside of the circle was grass.  I remember the lilies of the valley the most, and when housekeeping broke up there, I brought them to my house in Willoughby, then Mentor.  I brought them again when we moved here, but neither the lilies nor my dad’s August lily survived the drought of 88. 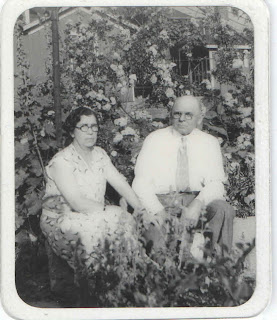 Aunt Lecty, Grandma Cox’s sister,  lived with Grandma and Grandpa.  Like Grandma Cox, she was a tiny woman.  I was fascinated by her real name:  Electa.  I asked my dad if that was the name of a Greek goddess.  He suggested I look it up in the encyclopedia and there she was.  A benevolent early Christian.  Dad bought us that set of Encyclopedia Americana so he wouldn’t have to know everything himself. 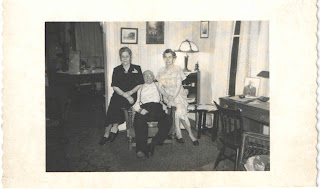 Electa Zerbe Tryon
Melvin Elmore Cox
Marcia Zerbe Enos Cox
Grandma Cox’s house was old fashioned and fascinating, and so were many of the contents.  There was a triangular hutch built across one corner of the dining room.  The top had glass doors that opened to retrieve the good glassware.  The bottom had wooden doors that opened to reveal a wooden box of wooden blocks.  We built cities with those blocks.  There were arches and cylinders, circles, cubes, rectangles, blocks of every dimension.  They were all made by hand and finished to have no splinters.  I wonder now if my Grandmother and her brother Elmore played with them.


When I was very little there was a coal stove in the living room and on the wall behind it a sampler my mother made for her Grandmother. 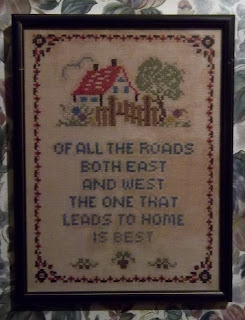 Of all the roads both east and west, the one that leads to home is best.   It hung behind that stove so many years the linen became brown from the heat.  Mom gave that sampler to me, together with others of the set she had embroidered as a girl.  Here’s a picture of the sampler from Selzer Avenue and one that didn’t hang behind a coal stove. 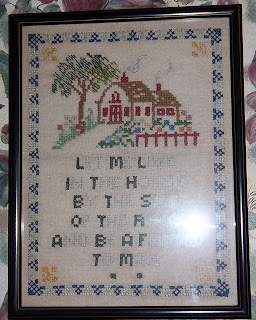 Let me live in a house by the side of the road and be a friend to man still has linen colored linen.
Grandma Cox had more treasures in her house, including the front door door stop and the back door door stop.  One was a black and white cast iron Boston terrier.  The other was a jolly wooden fat man.  When Grandma Cox  moved to a nursing home Grandma Rolf, my mother and my Uncle Hank intended to go back to the home to finish packing it up and getting it ready for sale.  When they went back the next day they found the nephews of Grandma Cox and Aunt Lecty had almost finished a clear out, and they drove away.  Grandma Rolf was furious; these men had not been heard of in several years until that day, and certainly had not aided or cared for their aged aunts.  She snatched the fat man from a box as one nephew passed her and offered to hit him with it.

I found the Boston terrier picture on an on-line antique auction site.  Grandma’s didn’t have such chipped paint.  But then, I haven’t seen it in more than forty years. 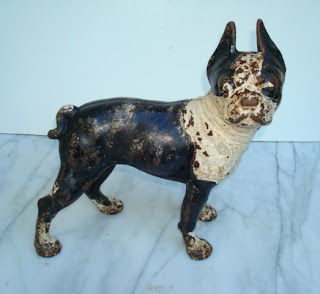 Posted by Joanne Noragon at 1:37 PM