Rising from the ashes

We have a local author, David Giffels, who has published several national books, and remains local. We all know him, at least by sight. He teaches at Akron U and has one less degree than I have. I wouldn’t want his job, though we seem to have the same hard scrabble attitude. He scrounged all over Akron’s rust belt as his childhood activity, absorbing it and thinking about what it could be.

I’ve published pictures of BF Goodrich, transformed into important offices and medical suites, but with an atrium to the roof cut through the massive concrete floors, the halls featuring the massive concrete supports. We succeeded in remaking this town because we succeeded, the hard way, on purpose. Not me; I just moved back. Giffels has an attitude about that, though not bad. We’re acceptable.

Giffels has out a new book, Furnishing Eternity. I re-bought his old book (I gave my massive book collection to the local library two years ago), The Hard Way on Purpose, to put it back in my head. Perhaps I relate to Giffels because I’m doing much of my recovery work both the hard way, and on purpose. I can be really snotty with doctors and lawyers and adjusters when I tell them I cannot live long enough to re-learn what I lost, let along regain full use of a leg, an arm, a hand. “Think about that, you self-righteous SOB, and give me a righteous answer.” 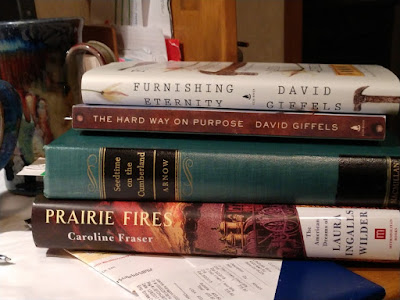 This post is only about stuff. I’m up to Thursday on my calendar. It’s only eleven in the morning. Lynn and I were going to breakfast, but her cat is sick and she’s particular and the cat has a vet appointment. We go to Michael’s in the valley. Its owner is my age, single and looking for a datable person.

I don’t know why this is such an issue for me, except that Les died, and if I wanted to continue to share lunch and world views with someone who also put air in my car tires, I’d have to look around, or get lucky. I’ve not done the former because the latter just continues to appear. I’d have to call the average fifty percent. An overqualified former Goodyear engineer and I won’t describe the zero who fleshed out the percentage.

Laura seems to read the blog on the way home from school. She knew about Roku’s when she came in the door last night. The Secret life of Grandma continues to blow away. Breakfast cancelled, I spent the morning on the phone with Spectrum, my ISP. Bored. So are those people in cubicles, solving problems. Often I get a knowledgeable young woman, always a pleasure. This morning I had Bob, from North Carolina. We pinged and tested and concluded the problem is Blogger; Spectrum is not dancing to non net neutrality—yet.

I switched to a person who could cancel my TV service.”You can save a lot of money over cable,” according to Miss Tenth Grader. I could save six dollars a month. The cable goes down, the internet goes up. Of course it does.

Last night I contemplated my empty day and decided I will finish the last half of the last sleeve I abandoned last year. Before I could never watch HGTV again. But now I can. Or maybe I’ll finish Seedtime on the Cumberland. I did quit the library book club; they’ll never read what I read. I still have HGTV. I do have to get up to the mail box and get that Roku. Now, that’s something to do.
Posted by Joanne Noragon at 12:05 PM