Structural factors that facilitated the election of a man who demeaned almost every marginalized demographic in this country are being re-examined.  The Women’s March was an outpouring of grief and anger, and a large rock that sent waves of hard examined thought across this country. In the last year no boulder so large has been launched, but rocks and stones continue to resonate.

(I love adult magazines that so clearly state positions it takes me a morning to write up! Thank you Slate, Huff Post, etal. The papers I dropped ten bucks apiece to for subscriptions are pretty good, too. I really like digging down to the local papers through the national papers. Attributions done, on with the essay.)

This weekend is an anniversary march, and I made plans to put in an appearance. We started a small scheme, a friend and me, to get to Cleveland, deposit me somewhere obvious and appropriate and retrieve me when it was time to go home. My new opiod does not facilitate marching, but, by damn, I can stand in one place and yell for more than a few hours.

Near selecting an appropriate corner in Cleveland, I remembered my daughter is coming Saturday, for the morning. From Cleveland. But, her son’s rock climbing team practices out of Appalachian Outfitters, here in the township. The same ones sending Laura’s team out Polar Bearing this weekend. Or, life is involved. I’ve already sponsored someone to go to the march; I’ll sponsor another one and be one ahead. Perhaps my job is mouth and phone. I’m facile with both, and we know I have nothing but time.

The strongest tree of resistance that has grown from that nearly spontaneous march a year ago simply is that: Resist. All the branches are organized groups across this country that have formed to act on local issues, local politics, local elections Actually, issues with a capital ‘I’. Voting rights, pay and wage rights, women’s rights, religious rights, race rights, it’s going on.

It’s astounding to me to see the scope and memory of institutionalized discrimination, violence, bullying. My history predates sexual molestation at age 18; I remember coming out swinging at a fellow fifth grade classmate bullying my five year old, kindergarten brother. My seven year old brother, ever the quiet peacemaker, at my shoulder, had my back. I took Ray Curly down, and might have buried him in the mud, except Walt picked me up and gave Ray a hand up. This year the history of so much inequity has been thrown in our faces. Our creative minds and abilities are devices and schemes to move forward.

Now I need to call congressmen about DACA and CHIP. Hard to believe, isn’t it. Obama’s CHIP, that made me quit smoking because it was a costly cigarette tax, is on the block. All those CHIP monies to go toward reducing the income taxes of the one percent. We surely have a lot of work left to do. 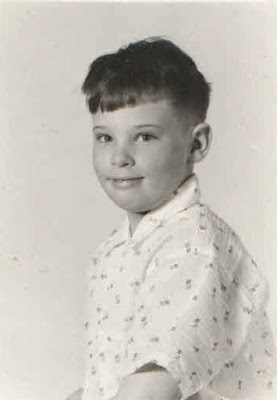 My brothers, Walt and Mel. I think I've nailed the ages here. I know that is Mel in kindergarten, and see how Mom has them in matching shirts for school pictures. 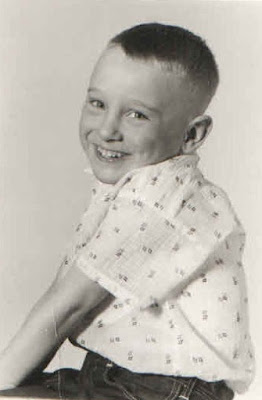 Posted by Joanne Noragon at 2:25 PM