Another company’s DNA results popped up on my morning email. 23 and Me. I used them to try and learn more about my father, past the tall and silent part. I knew my dad’s history basically from my mother, which was both his parents were Irish, from time immemorial.  His name was John Lindsay Lytle.

Dad’s mother’s people came from Cork in the time of the great mid nineteenth century famine. His father’s family was Ulstermen with deep Scottish roots. They emmigrated in the eighteenth century, and simply brought their talents over the ocean. The father of that Lytle family was a tailor and school teacher, his wife a physician.

I’ve a good deal of amateur genealogical research on both sides of my family. Mom was easy to trace. Her ancestors left draft records and farms in their wake. Dad was an enigma. Not his grandfather, not his aunts and uncles, but his parents. Or, why did his father, an Orangeman through and through, marry his mother, a short, round, red headed Cork Catholic, the oldest of going on a dozen siblings, and fifteen years his junior.

Five children and seven years later, the marriage fell apart. Mary had stories of moving too often, too many children, no money. George disappeared, but was discovered to be himself on his death, twenty years later, in Colorado. And the children lived lives of desperation and short rations, shuffled among relatives, in and out of the Children’s Home.  Dad joined the army the week after he turned seventeen.

I used to make up stories about my dad, based on his appearance. He was six and a half feet, far taller than the men from his mother’s family. He had coal black hair and brown eyes. All the other Irish men I knew from my grandmother’s family had red hair and blue eyes, and were more average height. I did meet a man from my grandfather’s side of the family, in my searches, and he was close to what I recalled as my dad’s height.

I called my dad a Black Irishman, simply because he more resembled what I read of those Irish than of the rest. The Irish who descended from survivors of the wreck of the Spanish Armada, King Phillip II’s  ill-fated attempt to invade England in the middle of the sixteenth century.

This DNA report throws in 30% French/Spanish DNA from my father. There’s the Spanish Armada. This DNA report also puts my ancestry having more Neanderthal genes than eighty plus percent of their clients.  This is a broad brush fact, but Neanderthal genes contribute height.  They also contribute endocrine disorders, alcoholism,  human papilloma virus cancers.  My family knows all three of those, well.

The 23 and Me report also says it can provide me with 1,080 first and second cousins all over the world.  I am very tempted to put my money down and see if I can contact my 15 cousins in Colorado. I still have not learned why my grandfather married my grandmother. 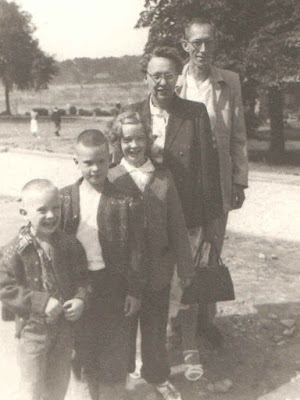 Posted by Joanne Noragon at 5:04 PM