This last week has been so overloaded. On the whole, I kept my mouth shut and carried on. I didn’t even write a post entitled One Year Anniversary, Government Shuts Down. Fun, but pointless. Since opening my mouth seems my best bit of ammunition, I carry on with phone calls to legislators that may seem pointless, but are part of the noise capturing attention. As much as my heart wants to march to protest, I know I physically cannot. So, I sponsor one for me and one more to fill out the crowd. The least I can do.

At the endocrinologists last week, I was in a civics metaphor. Walking back to the elevator, finger trailing the long wall because I won’t carry my cane, I became aware of a disturbance by the elevator. A young mother pushing a double long stroller of babies past a man standing in the middle of the hall. I wondered why she didn’t just stop and shift the stroller to make the turn. End of thought.

When I got to the spot, vacated by the irritated young mother, the man said to me, “Can you tell me where to find room 302.” It was the room I’d just left, so I launched into a “down this hall” explanation, before I looked up and full in his face.  In my defense, he was a massive fellow and it was a long way up. And, since I notice everything when I bother to, he was dressed in a fabulous leather overcoat, with appropriate vest and suit coat visible underneath, a lovely fedora, black gloves, a cane. And, the one eye I could see was white, like Laura’s favorite zombie movies.

“It’s down this hall; can I walk with you?” I said, and turned back. “That would be so nice; my helper couldn’t come today.” I guess he could see a bit, like a macular degenerative person I know. I smiled to myself; cane and gloves in his left hand, he dragged his right index finger down his side of the hall. Then he said, “I hear you dragging a finger on the wall. A matched pair?”  I laughed and said no, my problem was balance.

I opened the office door, and there was the new sign in system I hate. Type your name into a key pad. I went to a window, shoved open the glass (just put a full palm on it and slide!) and said a man with a problem seeing was in the waiting room. All three of them were out like white on rice; apparently he is an old favorite. I left.

I retrieved Laura from her Polar Bear weekend a bit ago.  She is damp to the bone. They made shelters of tarps and slept out two nights. Tarps, ropes and rocks, I heard. They hiked. They sledded. They zip lined.  They drank a lot of cocoa. They ate pizza one night, from their summer earnings. The next night they had a Dutch oven contest. “The boys, the girls, the grown-ups.” Four boys, three girls, four grown-ups. One camp fire, three Dutch ovens, and their choice among ingredients of hamburger, many veggies to slice or dice, beans, spices, pastas.

She knew about the contest ahead of time, and told me she would tell her team she would be in charge. She made a chilie. The boys made a goulash. “They ruined it. I told them, ‘Your noodles are done, get them out of the water!’, but they didn’t listen to me.” The grown-ups made a chilie, too. “Who won the contest?”

“My team. But it wasn’t unanimous. One grown-up didn’t vote, because he didn’t want it to be unanimous.” 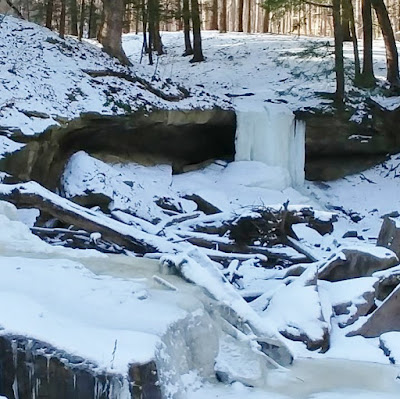 One of Laura's photos from a Polar Bear hike.

Posted by Joanne Noragon at 3:33 PM