This has been a rough and tumble year for this country. My life has settled into a comfortable routine that includes disseminating my political opinions at most opportunities. It’s nice to have a “grown up” conversation with a friend, or someone I recognize as a “dissenter”.

It’s satisfying to throw a politically disturbing thought into a group, friends, acquaintances or strangers. It’s over the top to foment heresy among the opposition. But then, my opportunities to drive my car up a twisting township road in an ice storm are limited. It’s about maintaining “the edge”, as well as potentially replacing weeds with crops in new minds.

The latest statement from the projection artist Robin Bell, and his mobile projector, is the Sunday headline. Shithole, emblazoned across the front of Trump’s DC hotel for profit. The dichotomy emphasizes Bell’s subsequent projection, “We are all responsible to stand up and end white supremacy.” A strongest average citizen sentiment this past week  is, Shitholians will be at the polls in November. 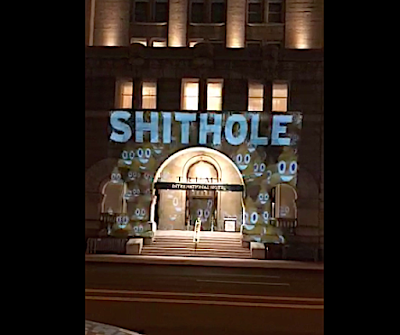 Descriptors of the worst presidents of all time include corrupt, inept, oblivious, irresponsible, criminal, ignorant. That last, GW, is not two decades old, and I thought the worst of my lifetime. That just was the wake up call. Ignorance is our crime, as is civil irresponsibility, complacency, silence.

Living dissatisfied is not a big job, not consuming. Mine resembles carrying a handout in a breast pocket and using it if opportunity arises. Except, I carry issues and opinions. My arena is the place I see the most people, the gym. Trump is a big help; he makes it easy for me to keep up a conversation.

My former trainer, now a certified cardiopulmonary rehab specialist at a different Cleveland Clinic facility, is a former Republican. I did have the advantage of her undivided attention for an hour a week for the last two years. Had I tried the same tactic with my late brother, for instance, he would have left the room. Pick your battles. After the November general election my trainer flashed her I Voted sticker, grinned, and said “You would be proud of me.” ‘Nuff said.

Another ground is right here in my trailer park. I have neighbors. I see people at the mailboxes, in the office. I am more than happy to give an explanation of health care changes if the opportunity presents. That’s coals to Newcastle here, however. The object is instilling the importance of voting, especially by mail. It all starts with registration.

Jen Hoffman has a lengthy gratitude list this week. It will keep me busy. I may even borrow Laura’s sparkle pens. Resist. 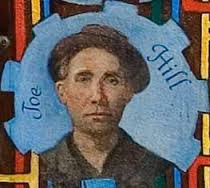