No such thing as a free lunch

I hear Roku in the living room. Miss Big Savings over Cable TV worked hard for her streaming, avoiding that great resource, information from those who know. Every time I questioned her on a price, a reason, alternatives, she consulted her phone and asked google. She is terrified service providers will learn she doesn’t know something. I know children must get over this reluctance to get on with life; however, I won’t overlook lack of facts.

In the course of installing Roku, I cancelled TV service and limited streaming to no more than ten dollars a month, the price differential of TV versus Roku. That meant downgrading Roku to $7.99 basic, not the $10.99 service selected. I could go on, but I had Laura in information overload, and quit when I had to explain “there’s no such thing as a free lunch.”

Our second ice storm of the week is in progress. School was cancelled again today, the fourth time since the new year commenced. I have no problem with that; whether on city sidewalks or township berms, little kids need to walk home from their school bus stop, and it takes too much experience and chutzpah for them to navigate ice.

Earlier this week I had the much anticipated follow up appointment with the new neurologist. Together with his new MRI of my brain plus the record of all images from George Washington, which I signed a release for him to obtain, I expected him to second my opinion that I never had a seizure, probably never would, and could discontinue Keppra. I read the new MRI report, that basically said nothing evident except capillaries are getting old.

I left early. I could take the interstate, overshoot my target and backtrack a few miles, or take the valley road, always a pleasure. I’ve explained my valley roads, down the hill, over the river, up the hill. Except, these roads all are balanced on ridges, for want of real hill sides and interstate quality bridges when they were built, back in the day they were named for the farm on the property.

It was raining, temps were dropping. I expected slippery conditions and was prepared. At the bottom of Steels Corner Road, two cars were in collision heaps on each side of the T. On Akron Peninsula Road, four more cars were in separate collision heaps at Bath Road. Crossing the river at Bath, cars were off on the berm. I couldn’t tell why.

I started up Yellow Creek Road. Big trouble abounded, no turning back. This road’s ridge is in terrible trouble, little room remains for road as the ridge tumbles straight down to the creek. Cars off to every side, but courteously had their noses far enough into the ditches to have their backsides off the road.

Up, up the hill, until we closed in on the Yellow Creek/Revere intersection. The road uphill was closed; workers were throwing salt by hand on the intersection, and we were detoured up Revere road. The operative word is “up”; Revere is still uphill until the Market Street intersection. The little train kept chugging up. Everyone left ample room for the potential disaster. The car ahead of me nosedived into the ditch. We kept moving. A car well ahead lost traction and stopped.

The car behind took the left hand lane to pass it. The downhill traffic wisely stopped and the little train kept on climbing through the ice. I eased around, never changing pressure on the accelerator. The tires were turning, looking for purchase, but not sliding. They grew hotter and hotter; I didn’t flinch. The Land Rover ahead had cleared the top, the big truck behind was closer and closer, but not stupid. My little car kept on until….tires caught, slipped, caught, slipped, caught, caught, caught.

The new neurologist had not received the George Washington images. “I even called them myself. You cannot quit Keppra until I see them.” I got another signed release from him and took the freeway home.

I called GW to learn the protocol for obtaining the images. The options were to deliver the release in person or to mail it. In thirty days I will receive the images. I wonder if doctors have a secret handshake. 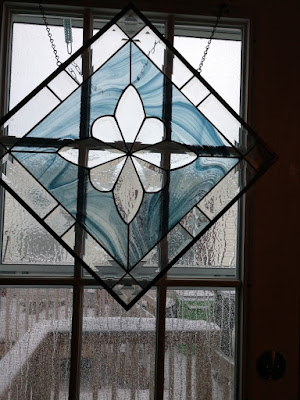 My back door, the morning I saw the new neurologist.
Posted by Joanne Noragon at 4:51 PM