The earliest I remember being in a car and knowing it was a moving vehicle was after the 1936 Dodge coupe needed a back seat, about the time my brother became a toddler and was awarded the space between my parents. I've written of the misery of that back seat, but I have other memories of that car, too. Winter memories.

We lived on North Hill in Akron. The operative word is hill. In order to visit half my relatives, as my parents did about every weekend, my father drove that little coupe into the same valley I still live on top of, back up the other side to visit my aunt and uncle in Richfield, or my grandmother in Cleveland.

Dad put chains on the tires in winter. The chains clanked on the roads across town, and crunched on the snow on the hills into the valley, over the river through the covered bridge, along the railroad track and back up Everett Road, off on our visit.

Snow that melted to slush was a problem. Other cars threw it up and dirtied the windshield. I remember a trip home, dad stopped several times on Riverview Road to wash the windshield with a handful of clean snow from the roadside.

I wonder how snow was removed from roads back then, especially residential roads. I remember the neighborhood men shoveling the hill on Gardendale and spreading ashes from the furnaces in order to get up the hill to go to work in the morning. I can think of close to ten families whose breadwinner had to get a car up the hill. My brother reminisced of times all the cars were parked along the cross street and Gardendale hill was the neighborhood sled run.

We did not have our garage on Gardendale until about 1950; dad parked in the drive at the front of the house. But since that drive went downhill, in the winter he parked next door, on the Cole’s level drive. He drove Helen Cole to work in the mornings.

Automobiles were “warmed up” back then, brought up to temperature. One morning Dad walked over to the Coles, started the car, came back for breakfast. A very few minutes later our phone rang. “John, John the car’s on fire!” I heard Helen’s voice through the phone, dad dropped the receiver and ran next door. The 1936 Dodge was a total loss!

My last childhood memory of cars and winter is 1955. Mom and I were downtown Akron and starting home in rush hour traffic.  It began to snow heavily, the traffic moved fitfully across the high level bridge onto North Street. Mom surmised the problem was no one could get up Dan Street Hill. She pulled into the yard of a construction company, locked the car and begin walking. Dan Street hill was indeed the problem, snarled with cars sliding every direction. It was the best route home, but too dangerous with cars, so she took the longer, easier slope up Home Avenue. We went straight up the middle of the road, walking the invisible center line.

Cars passed us, moving slowly, until one just abreast began fishtailing. We watched for a moment, Mom sizing up the situation. She went to the driver’s window, announced she would tell him how to get up the hill. She would push from his side, her daughter on the bumper, and he would follow her instructions for the accelerator. Mom always said what she meant and meant what she said; the driver fell in with her plan. I was just the twelve year old in saddle shoes in back; we walked that car to the top of the hill, to, I hope, undying gratitude of the long line behind. 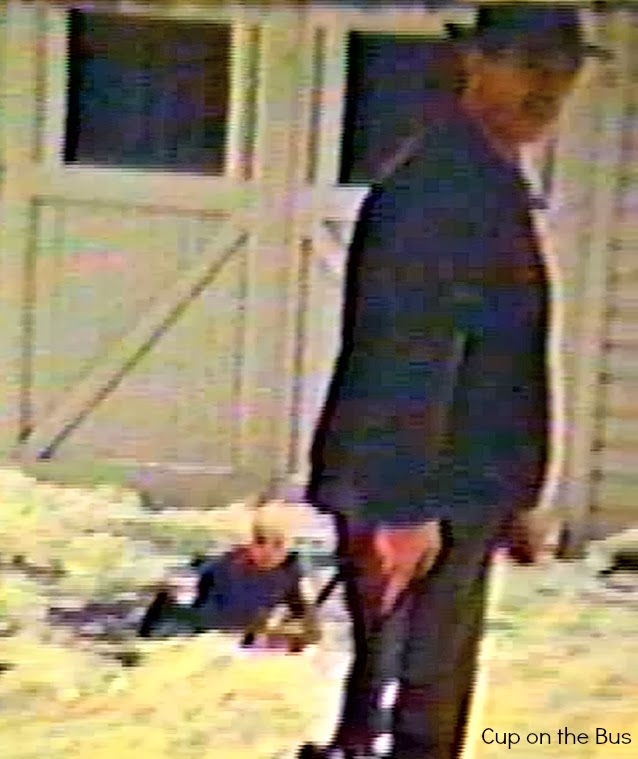 A screen grab.
Shoveling snow at my grandma's house,
before there was a back seat in the Dodge coupe.

Posted by Joanne Noragon at 5:17 PM