Back to center, and other nonsense from the house with equal numbers of children and adults.

Normally I get up at 8 am, because I can. I set my own work hours, and they begin with a stop at the post office for township mail. The post office opens at 9, and even then I seem to pick up yesterday’s mail. Although the township box is in the second of ten banks, the nice post lady is seldom to it when I arrive, and the nasty one definitely is not. Unlike Leon, who has been assigned to another post office, neither of them will flip ahead and hand out my mail.

Something was ringing this morning, way too early. My phone. Another damn weather alert, my brain reasoned. Then I heard Jan’s cell phone ring. “It’s the school,” I said, too late, but recognizing the number of doom. She fumbled through to missed calls first; buses delayed two hours. Tom was just driving the children to the corner in single digit temps. “Take my car and chase them down.” I went back to bed.

One decision into my day, and I could not go back to sleep for my last ninety minutes, so I got up, showered, told the children to get in the car, I would drive them to school. Additional motive:  Hamilton could pump gas on the way. It didn't look promising at school, where the sign on the door said School Delayed Two Hours. Back to our corner where, having passed the bus on the way home, I sat with them at the corner, awaiting the bus. They told me the car was much warmer this time around.

After breakfast I left for my appointment for the one week check of my new glass lens. Off into the snow and cold, thankful for those wrap around, polarized lenses.

I had more than a new lens behind the glasses. Sunday, carrying my laundry into the laundry room, I looked away to tell Hamilton something, lost my balance on the step up, and splat….flat onto my new glass eye. I recovered for as long as it took me to get up and put my laundry in the machine. My glasses were relatively unscathed, my vision no better or worse than before, no blood. Hamilton and I left for church. I dropped him, and went to work for the morning. I have an audit starting Tuesday and that doctor appointment this morning.

At work I thought, some ice probably would be good.  I found a plastic bag, put a couple cups full of snow in, twisted it up, applied it, and started into my information for the audit process. When I saw myself in the washroom mirror, Holy black eye, Batman. If you’re squeamish, look away.

At the ophthalmologist this morning the nice technicians could not believe the state of my eye from cataract surgery, but I came clean. The doctor seems to have been pre-alerted. He bustled in, examined my eye for damage, and there was none. Then the regular testing. My glass eye reads half the 20/20 line, beautiful progress. What did I think of my new vision? In a word, how soon can the other eye be fixed? It will be his first open surgery date, the third of March.

Back to work, and all along the golf course I saw snow rollers. Photo courtesy of Channel 5. I didn't know what they are until the road super told me. In fact, he promised me I could lift photos right from his Facebook page, but he hasn't posted them yet.

The old snow surface freezes just enough the new snow can’t stick; the wind catches and starts them and they roll merrily along. They look like hay bales, one directional rolling. An unusual occurrence, the news said. 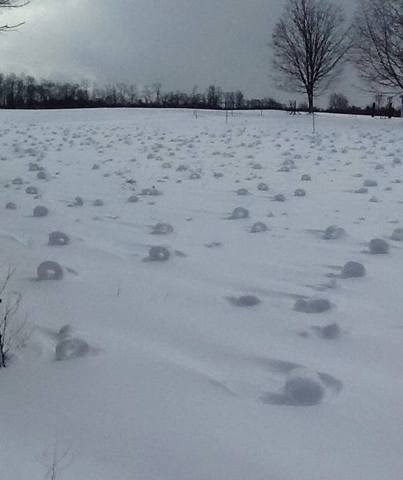 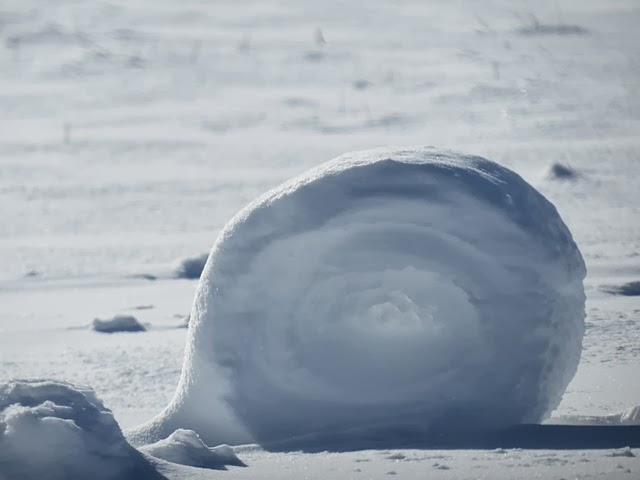 And back to center? I have slacked off the gym since the children came, and never did get the hang of balance training during therapy after the stroke. So, I called the fitness trainer right across the street from work and made an appointment for Thursday. No more excuses. Back to the lily pads and centering ball training.

And, the children have no school tomorrow, but I must get up early because the auditors arrive at 9am, and my government office will not be closed. 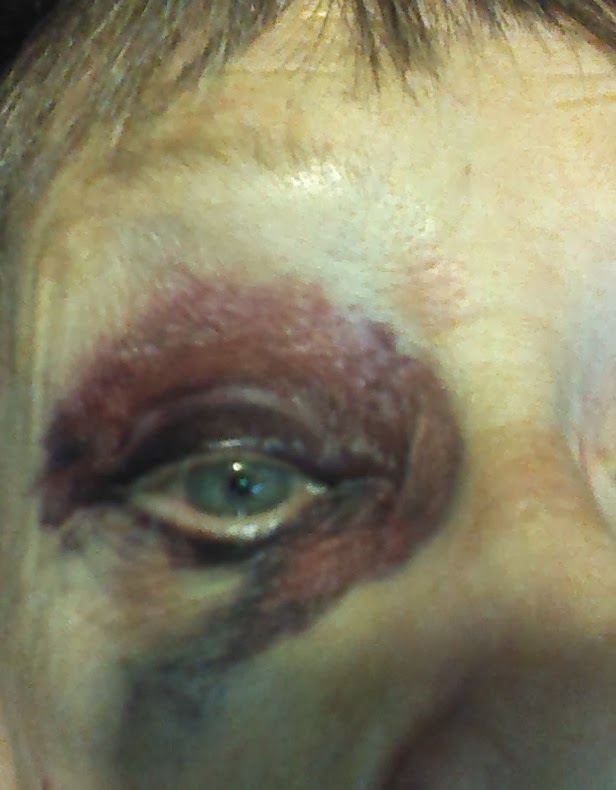 Posted by Joanne Noragon at 8:26 PM