The hair brush in my bed

In the middle of the night, long, long ago, I woke up wild, thrashing, struggling with the covers. I was in terror, sobbing deeply.

Suddenly my father appeared, untangled me from the winter blankets, asked what frightened me so. It was formless, but he put a word to it—fright. What caused it.

The hairbrush in my bed, I sobbed. He kindly explained there was no hair brush; I didn't believe him. A hair brush was hurting my feet. He took all the covers off the bed to show no hair brush.

He sent me to the bathroom and to get a drink; when I came back the bed would be made up again. I left, but I knew the terrible hair brush must be there.

When I returned the bed was turned down. I was doubtful and reluctant. “I found the brush,” my father said. “It’s there on your dresser.”

The awful stinging in my foot was gone, and the culprit hairbrush was safe away on the dresser. I went back to bed.

I remember my young interactions with my father as his little acts of kindness. Locating the hairbrush, explaining quarters were big nickels, five of them, teaching me to tie my shoes, reading books to me, reading Heidi. We began the book one evening, and he got Heidi up the mountain and to her grandfather’s door.

The next day he was taken to the hospital. When he came home two thirds of his stomach was gone, in removal of ulcerating lesions. It was 1949 or 1950. He was still a young man, in his early forties, but he became old and withdrawn.

Dad was unapproachable when he came home from the hospital. I remember him at the end of the supper table, eating little dabs of baby food from his plate. I remember him coming home from work, exhausted, asleep after supper

Several months into his recovery he asked me to get Heidi, for us to finish. But I had pushed my second grade reading skill to the limit and finished it while he was in the hospital. “Oh, I finished it.”

We occasionally reached out to each other, but the connections weren't satisfactory. Mother was a buffer. And child rearing those decades was rather hands off. Perhaps it made children more independent. Our obligations were to go to school, do homework and come home in summer when the streetlights came on.

Do I wish differently? Not really. He was always there when I needed him, especially to take me to the emergency room for stitches.  My father passed away years ago, on President’s Day in the midst of another record cold winter, probably why I've thought of him today.

The hairbrush in my bed is one of my earliest memories of my father; him surrounded by his grandchildren among the last. This picture is the last one from dad’s camera. 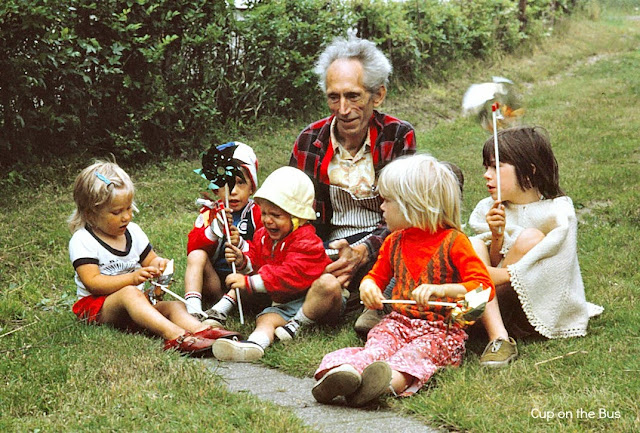 Posted by Joanne Noragon at 4:24 PM