Today’s class in problem solving was far less valuable than the last. I looked at photos of problems waiting to happen and was asked to offer solutions. One photo was a child, maybe two, who was standing on a cupboard. No visual clue of how he got there, but what did it matter. Name me a child who has not figured out how to get up and get the good stuff and generally get away with it.

There are almost a hundred children here. Laura is the oldest. She rode her bicycle once this summer. The other children on bicycles swarm the pavement. They race and dare and taunt. Or, they help the smaller ones. All in all, it’s a community of kids responsible for themselves, and doing a decent job of it.

Last night there was an over the handle bars accident when a front tire did not clear a hole. The EMS crew was half an hour getting the child on a board and off to the hospital for treatment of his road rash and stitches in his face. Poor child. He is swollen and cut and miserable today. His name is Nicoli, and he is a scamp. I love him.

I stopped at the library and reiterated to my trustee buddy (not you know who!) the number of people here. I told him what happened to Nicoli last night, and how in his family of several children, one parent is off on another assignment and one keeping house and home together. I’m sure Nicoli is riding a third hand me down bike, and there is not an extra penny in that house for a bike helmet.

I suggested that, at the food drive this year, the trustees put a word in the ear of big donors the need for bike helmets. The manager of the “estate” is willing to provide the names and address of the kids in the park old enough to ride a bike. My trustee friend thought it was a good idea. I may call my other trustee buddy, too.

Now, to get the kids to wear them. Since everything is distributed by police, fire and EMT, I think a little ritual at each house with helmets for kids: raise their right hand and solemnly swear to whatever uniformed official who gives them a helmet  to wear it , because they remember what happened to Nicoli. 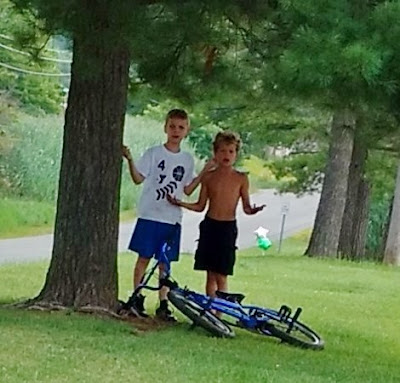 Nicoli is shirtless. He and his buddy thought I would bust them for trying to climb the tree. I grinned and gave them a thumbs up, and we've been buddies since.
Posted by Joanne Noragon at 6:36 PM