I’ve added “speech” therapy to my physical therapy schedule. I took speech therapy during my stint at Edwin Shaw, during which time I joked it should be called cognitive therapy. I had no clue those therapists evaluated me and concluded my TBI screamed for cognitive speech therapy. The speech therapists cover the gamut, including swallowing therapy. Anyway…

In the afternoon, these literally made me faint and ill. One Saturday, when all the therapists are the newbies, we started out on these puzzles. We worked our way through one, two and three variables. When the fourth hit the table, I calmly pushed it back and announced I didn’t do these. The young man cocked his pencil and began to solve it. I finally quit watching, just about the time he crumpled it and announced he didn’t do them, either.

The therapist evaluated me today, which included the story of how I acquired a traumatic brain injury. “Well, that accounts for your funky hair cut,” she said, pulling out the damn variable puzzles. I did one, two and three lickety split. She offered a paper and pencil to keep track of the next one. No matter. My brain was in terror and wrapped its fingers around each other, physically. I closed my eyes, but couldn’t stop tears. I know I could not have walked. It was brain terror. It was my reaction to cognitive dissonance.

I remember waking from the massive stroke, seven years ago, my brain stripped of every noun in my vocabulary. I was angry. Mad. I clawed my way back. I wrote nouns I heard in the corridor into my little book, to study on when I was awake. It seems I should be just as angry this time.  I’ve never been frightened into submission.

I set out to tell a different story, and have little idea where it went and how this one came about. I looked in my albums, and found this picture of me, at the end of March, unconscious, while my seventy fourth birthday was stolen. 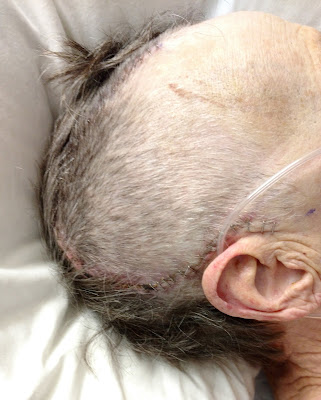 My hair stylist begs to make all my hair the same length. Absolutely not! Do you see how slowly it grows. I’m unhappy enough to leave it exactly as it is. I may encounter that little, fat, big red bus driver some day.  I’ll show him! 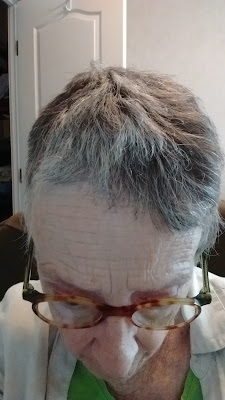 Posted by Joanne Noragon at 7:37 PM