A note from your doctor

My doctor was the first to move into the Akron General Medical Building near me. I’ve made a bit of a medical mess of myself over the years, and have passed through the emergency room as well as their CAT scan, EMG and more. I took physical therapy there after the stroke, and when I’d frustrated Dana and Rhonda past endurance, I walked a little further down the carpet and joined the gym.

I stuck with the gym program for a fair number of years, and even convinced my sister to join. Eventually I quit going—my first name really should be “Slacker”—but after I broke my arm, I knew I needed to get my core back, and not let a flannel night gown get the best of me again. I engaged a personal trainer, Kristen, and for a year and a half she made me work out one day a week. In fact, I planned to come back from the DC spring break on a Thursday, to make my Friday session with Kristen.

There is a tiny loophole at the gym. For good cause you can go on “leave” and have monthly dues suspended. I remembered to do that last month. I did need a note from my doctor, who is notoriously non-cooperative on this subject. I got a note from Dana.

A while back Dana mentioned I should work one day a week with Rhonda or her, and a day with Kristen.; I called Kristen. I even got back my old day and time. Only thing left to do was reinstating my membership and paying the gym for Kristen.“But you’re on medical leave!” “I know; take me off.” “We’ll need a note from your doctor.”

The next day Diane called. “She said to ask your neurologist.”

Today I explained my Catch 22 or 24 to Dana, who sighed and said she’d talk to the Life Styles lady. When I go for my appointment Monday, I’ll be reinstated and I’ll pay for Kristen, or I don’t know Dana. 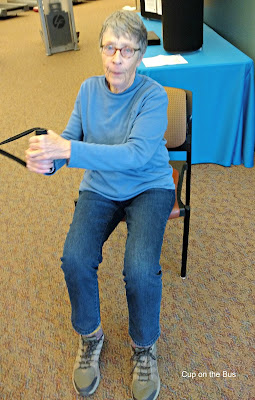 I just had a revelation. Back when I had the stroke, I was frustrated with rehab and left it early. Rehab simply was not happening fast enough. I’m frustrated with rehab with the TBI, too. It isn’t happening fast enough. I do the routines over and over and over, until they show me the door; that’s enough for today.
Posted by Joanne Noragon at 9:24 PM