You know I like herons. We have a rookery near us where the birds begin congregating and building in late winter, February/March. 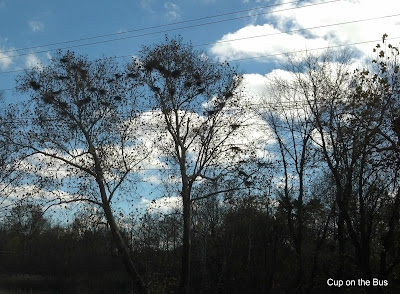 We can see them flying, in search of food, when all the chicks are demanding fish. They are a long bird in the sky, feet extended under tail and neck generally in an S shape. 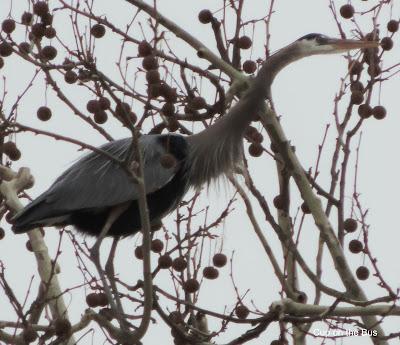 I've read and read about them, and find little more than I already know. They mate for a season. Both parents tend the nest and go in search of food. They live to be about fifteen years old.

Here's how to tell the difference between male and female:
The male is taller.
The male is bigger.
The third spring, when the heron is mature enough to breed, its legs turn bright orange and the skin around the beak turns a bright blue color.
Males' legs are typically slightly darker than females, though from a distance, this distinction may not be visible.

Getting someplace now, aren't we!

We've had a heron at the golf course lake featured in my header since 2014. Four years now. "A heron," as in one. 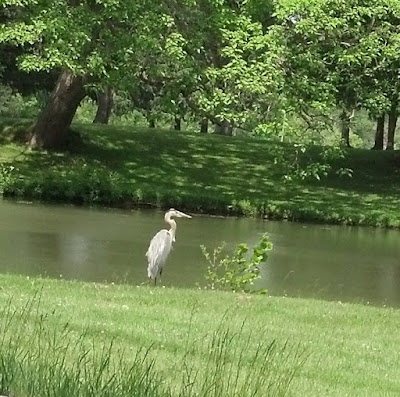 A lucky shot in 2014. The most shy heron in the universe. Just stopping the car sent it walking rapidly to the other side of the lake. 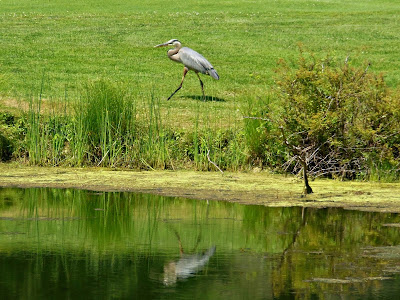 This is one of my favorite pictures of the heron. I posted it on the township web site in 2014, titled "Heron gone."

This is the bird's fourth year at the lake. It is alone; there is no other heron. This lake is not where herons nest, although there are sycamores at the back edge.  The heron is now accustomed to golfers and gawkers, not moving from wherever it is seen. 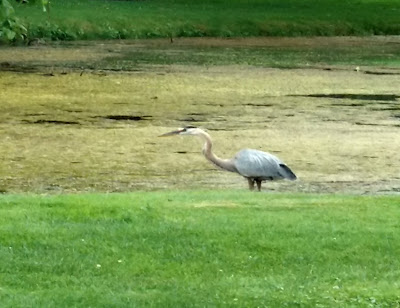 Here it is yesterday, wading and feeding at the edge. I cannot fathom its sex, or it's intentions. How did it wind up here? All the rookeries begin at the next bend in the river, not a mile away. What brings this one to live at a golf course?
Posted by Joanne Noragon at 11:32 AM