Fibers I passed in the night

Linda Starr is a potter who uses textiles in her work on occasion. She asked if I wove with more than the cotton I enthuse about, have I used linen, hemp, silk and knoff. The last I do not know and turned up nothing concerning. I've fooled with the first three.

Linen and hemp are bast fibers and thread from them produced in essentially the same way; linen thread comes from breaking down flax stems, extracting and processing the fibers into very long threads that can be spun into very strong thread. Hemp is processed from our friend the marijuana plant in the same way. Hemp was essential to the rope industry in this country through World War II.

Many plants produce bast fibers that earlier civilizations harvested and used for rope. The long curly fibers that separate from yucca leaves in the fall were collected and twisted and used centuries before flax and marijuana were thread crops in this country.

Linen is a less forgiving fiber for hand weaving.  It’s crabby stuff, actually. The threads of all but highly mercerized (gassed) linen yarns tend to stick together; every shed must be cleared by hand to pass the shuttle. It is a far more brittle fiber than cotton, and the threads must be kept moistened as the work advances. That involves a spray bottle of water, and on consideration I did not want to constantly subject my fine maple looms to a mist of water. I wove some linen once on a small loom I used for fun.

Hemp became available for hand weavers only in the last twenty years or so, and still must be imported as marijuana growing is in its new infancy here. Since most textile manufacturing has left the United States, and since third world manufacturers are far less regulated in the production and manufacture of yarn and fabric, I've read that much of what we purchase as linen anything actually is hemp. Hemp continues to cost far too much money for me to be interested in weaving it, but I understand it behaves just like linen.

Silk is a protein fiber, not just from silk moth cocoons. I've spun silk, to see how different it is from spinning cotton, flax or wool. I've never woven with it. Again, it is an expensive fiber that rises in the price chain according to the amount of processing. The most silk I could afford were cocoon caps, and I didn't like the feel of them, loosening the silk fiber to spin a thread. That was nineteen eighty something.

So, we explored cotton. We could source it inexpensively enough to weave fabric by hand to turn into affordable garments. People liked them and bought them, so we made more, and sold more, and made more and so it went on.

I did weave things Linda could never have asked about, though. Out of my highly engineering focused manufacturing background an old colleague appeared with carbon thread and asked me to weave it into a small square they could heat to a high temperature and turn into ash for some lab thing they were doing. I wove a two inch square of carbon fabric on an old Weave-It loom from childhood.

They didn't ask me to make another, but did send along another entrepreneur. This fellow showed up with fluorescent thread to weave fabric their company could make into fluorescent dog coats. We put it on another little loom we used for classes and demos. When we turned off the lights and left the studio at night we could look back and see the fabric glowing eerily.

Apparently the fellow produced it at a shareholder meeting, and, Steve Job like, took center stage and held up this lemon yellow piece of fabric. No reaction. The lights went down and, I’m told, the audience oohed and aahed. I don't know if this is the stuff or not. Handsome dog! 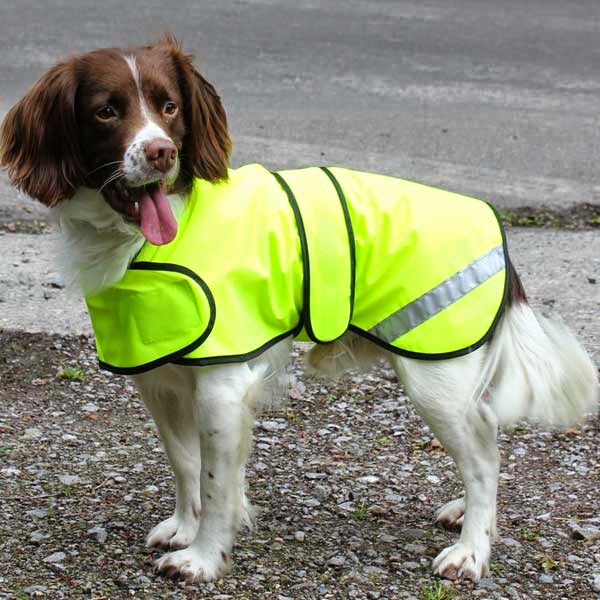 Posted by Joanne Noragon at 8:37 PM