Twenty one of us signed on over at Janie Junebug's Women: We shall Overcome to post a Christmas memory piece today. Janie even wrote a tutorial for me, to use the linky bit. Of course, I have failed the linky test. I hope you will bail me out by going to her blog and finding the Christmas memory post links at the bottom of her post. Here's my contribution:

I could be older, but fortunately I’m not.  I was born during the war, of Depression era parents, and grew up in the halcyon time between the return of the troops and Woodstock. It was good to be a child then; our mothers put us outside after breakfast and with brief pauses for lunch and supper we were back out until the street lights came on. In winters we were put out in snow suits.

We had few expectations except those meals, baths, bedtime and that our parents took care of us. They didn't say they loved us, but we put the word to it later on, when we learned to read and encountered the word. Sometimes they would say things like “Tomorrow is your birthday!” and come tomorrow we had a cake for dessert, and a present. Socks, underwear. Once I got a much needed wastebasket for my room.

Adult excitement did mount between Thanksgiving and Christmas, The Holidays. Large gatherings of the extended families happened then, on the days, and in between. Babysitters appeared and parents passed before us, dressed in their best, going to parties. We sat in a row on the sofa and watched them leave.

The big day would arrive, ushered in by the children at five or six in the morning. A book, a longed for blouse, the gift of Lincoln logs or an erector set for all the children. Nothing left to do but have waffles for breakfast and wait for the main event, mid-afternoon dinner at a grandparent’s home or a favorite aunt and uncle.

Oh, the arrival by back doors into the warm and steamy kitchen. Coats piled on a bed, women moving in the kitchen, men in a cloud of smoke in the living room, children shooed until they reformed into cousin clumps playing Monopoly or Parcheesi.

In spite of best efforts, eventually the kitchen table might be ringed with small children who were tided over until dinner with graham crackers and milk. Two grandmothers at the stove would be fussing over gravy while the daughters-in-law mashed sweet potatoes and refilled coffee cups for men.

Eventually we were all around the table, passing dishes, plates prepared for little ones, and meat cut. For an afternoon the hum of the grown up voices and the clink of the silver over our heads, the warmth from the kitchen, surrounding us with the comfort of care.

Remembering, carrying our own children and grandchildren, asleep, up the stairs to be put into bed after Christmas at grandma’s. 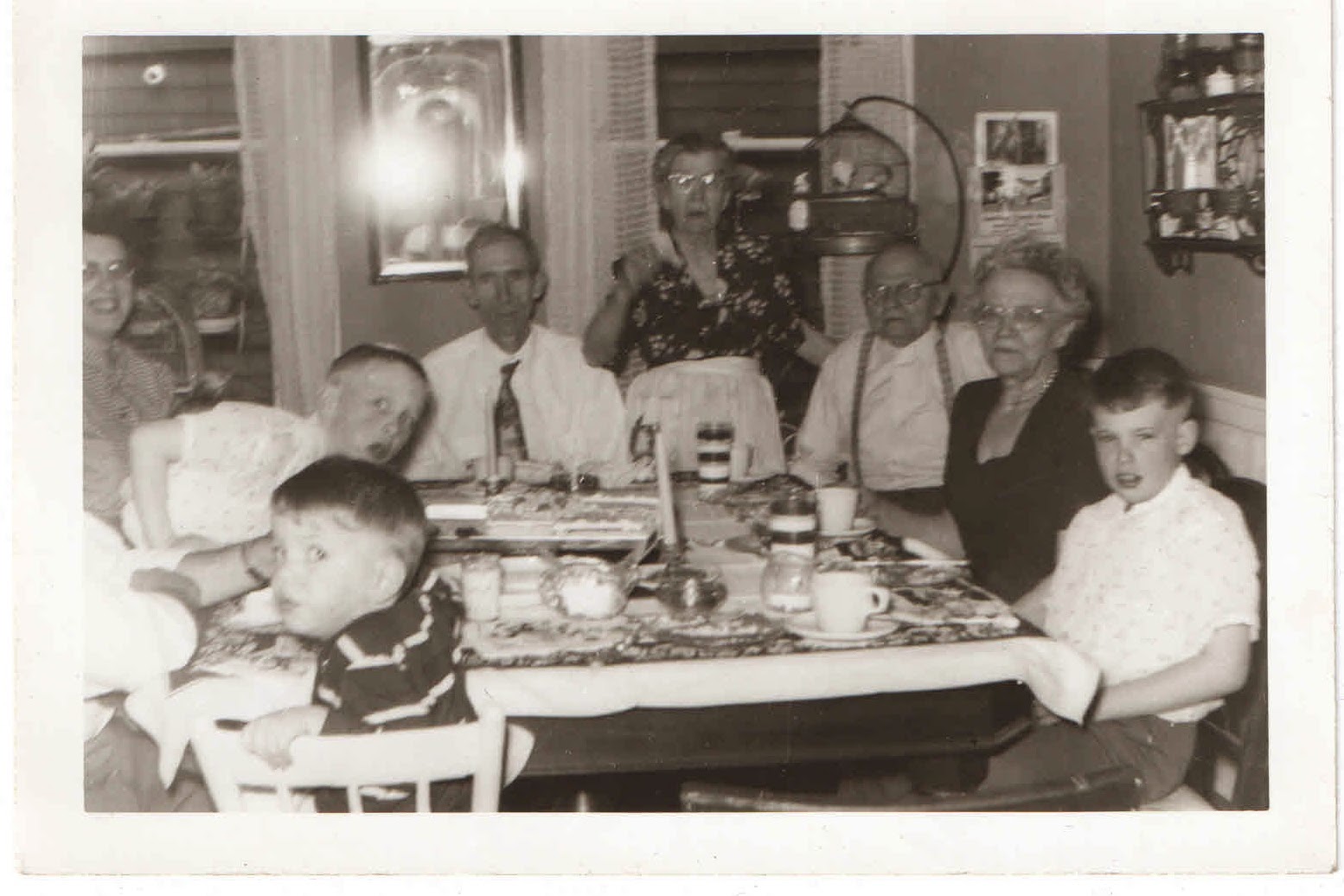 Posted by Joanne Noragon at 1:00 PM