For a few months long ago I worked for a construction company. I just checked them on the internet; Forest City Enterprises is a multi-billion real estate management and development company in Cleveland. Well, I’ll be. I was in the development part, I suppose, back when our own weaving business was finding its way. I worked for them one spring, through an accounting temp agency. This was in the days before we could qualify for a line of credit to get us through the spring and into the selling season. Another story.

I was hired to shepherd a division through being shut down, its assets sold. This division did some specialized construction, and had one final apartment complex going up in Silver Springs, Maryland.  I poked my nose into everything to understand what I had been hired to do.

There was a plant where slabs of concrete were poured. These slabs became the floors and walls of the multi story apartment complex going up in Maryland. Before my time I believe they also made all sorts of walls with designs and scenes in relief in the concrete. In color. Colored gravel picking out the design. But, I was there to close down the construction project and get the assets sold.

Nothing but concrete slabs came off the line and went onto flatbed trucks into downtown Akron. Some slabs had preformed holes in them that later became bathroom or kitchen waste lines. Some had preformed doors and windows. The slabs arrived at the old car barns in Akron in strict sequence and were off loaded to flatbed railroad cars in the barns that had been the roundtable for Akron’s trolley cars.

As the car made its way through the barn first the floor was placed, then exterior walls. People began working inside, building interior walls and closets. An entire kitchen went in, complete with appliances. The kitchen sink was placed, as well as the bathroom sink and overhead light fixtures. Some rooms were bedrooms, dining rooms. Only the toilet made the trip to Maryland secured in a closet to prevent breakage. At the end of the line each room was wrapped securely and sent on its way. In Maryland they were lifted by crane to the next floor under construction.

Back here I went through the books of record and located the capital equipment and inventory. A plant manager went through and tagged everything according to the depreciation schedules and purchase records. Bills for the construction in process came in, and I authorized them for payment. We took the final inventory on a blistering hot day and I still recall the taste of sweat and dirt as I knelt in the yard counting rebar.

Finally the apartment complex was finished, the assets sold, it was all over but the final accounting. I worked through paying the bills and closing the books. Then, I opened an envelope with the expense account from the construction manager. It included a staggering restaurant bill and an invoice for a pine tree.

There was no one left to ask, so I called Cleveland. Yes, when a project is finished it is customary to set up a pine tree on the roof and take everyone out to dinner. There should have been a construction in process purchase order for that, I was told, and sure enough, there was. The line item was topping out. The link is to Wikipedia's explanation of the custom. 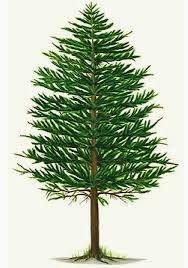 Posted by Joanne Noragon at 1:14 PM