Twenty odd years ago, when I was thick with Peninsula merchants, we invented Python Days.  Peninsula’s python has a long history, and we helped revive it.  A Cleveland reporter, on a slow news day in the depths of World War II, thought he’d lighten spirits a bit by enhancing on local folklore he overheard, probably at the Peninsula Nite Club. The python became legend, as much as a small town python can become legend.

I remember writing the press releases promoting Peninsula’s python.  Our efforts sputtered and fizzed along for a few years, and almost passed into history, until Harry Potter days arrived in town.  You recall the frenzy around the release of the last book.  Peninsula had, at the time, an independent book store, and the owner, together with the other merchants in the Peninsula Chamber, held a two week-end extravaganza.  If you were a parent or child, what excitement.  If you weren't, detour town.

Town merchants, being in business to make money, reserved that weekend for the revival of Peninsula’s own python, intending to build on the crowds that came for Harry Potter. I doubt the street closing crowds of Harry Potter days have recurred since, but the streets are closed and there is a parade, and games, and contests all over town. Peninsula Python Day!

All that lead up to leaving for the library and work this morning.  I thought Emily was bringing her guitar for this morning’s Kid Wrangler activities.  Instead she brought her brother. 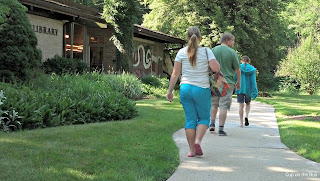 Around the supper table we got the rest of the story.  Hamilton was brought along to be introduced to Sue, the coordinator of kid games for Python Days on July 20th.  On her first day as Kid Wrangler Emily was asked to help with Python Days.  When she realized the scope of the activity she decided a Kid Wrangler assistant would be very useful, and brought Hamilton along to have judgment passed.  Her plan worked out as she intended; Hamilton has been asked to be Kid Wrangler Assistant.

I hope you stopped to read something about the Peninsula Python. Way back when we revived it we asked Honore Guilbeau, a Peninsula artist whose name some may recognize, to design a logo.  You can see it back there on the Python Day website.  Ms. Gilbeau also designed the front of the Peninsula Library, seen in today’s picture.   The façade depicts both the Cuyahoga (Crooked, in original Native American) River and life in the valley.

We made banners featuring the logo, way back when, and participating merchants hung them outside stores.  I’ll find ours and hang it up on Python Day.  It’s one of only two remaining, and I won’t part with it.  The library has the other banner.

Posted by Joanne Noragon at 5:21 PM