I googled the name Saffron Two Cats because once we knew a girl with that name.  Surely neither her given name or her legal name.  Once I had her card, with a phone number.  She lived in Highland Square, a casual, relaxed, arty enclave of large old homes turned to multi unit dwellings.

We met her because she wanted to purchase a simple loom.  We were dealers for two loom manufacturers, but had other looms in the studio from buy/sell/trade transactions.  Looms circulated regularly in the weaving community.

When Saffron Two Cats came to the studio we had among our looms an 8 harness, 10 shaft cherry Kyra, 45” wide.  A beauty, and when it came on the market we had to give it a try.  Jan wove a little on it, but it was not a practical loom for us.  When Saffron entered the studio she was drawn right to the loom.  She sat on the bench; she stroked the wood of the beater, the castle.

“Can I buy it on time?  I have $50 with me to put down. If you sell it to me, can I come weave on it until it’s paid for?” We made the deal.  Saffron came several times, with another five, ten or twenty dollars, and wove a little more on the warp we left on the loom.

One day she came with her brother and his truck and seven remaining one hundred dollar bills.  We never saw her friend after Saffron’s first encounter with the loom, but I always felt the friend was the source of the last seven bills.

I googled Saffron’s name in curiosity.  Interesting answers came back.  There is a Two Cats book store selling the Firefly les Femmes poster Saffron. Under that google listed a blog about a cat named Saffron before trailing off into feebleness.  But, the advertising block had me riveted.

I was looking for saffron, google gave me saffron.  Shoes.  Of course google knows I love shoes.  Google swept the world wide web and showed me two saffron shoes. In my preferred style, sneakers.

The political inferences are so ironic.  ‘Nuff said. 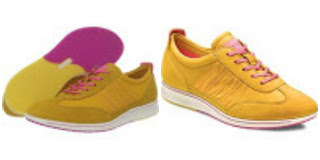 Posted by Joanne Noragon at 2:18 PM