Up, up in the sky

Heavy rains, today.  An inch or more forecast, and that is excellent. Yesterday the skies were the blue that artists paint and poets write of.

You know I think the world of these two men.  Tim, the road super, who saved the sunflowerfrom the Memorial Day parade last year.  The sunflower that Doug, the road assistant, and I were charged with watering the week Tim was on vacation.  In one day we nearly baked the poor thing to death, but Doug set up anIV drip of chicken manure water and Sunny was revived.  (Click on the "Sunflower" label to read her story from last year.)

So, I found Tim and Doug looking way up, and I looked up too, but only saw three planes and their contrails. Cleveland Hopkins International Airport is about twenty miles northwest of the town hall, and air traffic is not an uncommon sight.  As I remarked.

“Do you ever wonder if they will crash in the sky; look how close those two are!”

No, I've never wondered that, as air traffic controllers are in charge.

A little disappointed planes in the sky did not fascinate me, Tim added “We've seen the President’s plane go over.”

“Fighter jet escorts, one on each wing.”

With the Fiscal Officer suitably impressed, Tim added “Doug’s even seen numbers in the sky.  Tell her, Doug.”

An embarrassed Doug was prodded into his story.  Driving with a buddy, they both remarked on the striking cloud formations ahead of them, clearly, remarkably forming three different numbers.  No question about it, they both saw them and said them.  “We should play those,” Doug’s buddy said.  “Waste of a buck,” Doug said.

At the next gas stop Doug filled the tank and looked around for his friend, who came out of the station folding his lottery ticket.  He’d played the numbers pick three, boxed.  He advised Doug to go buy a ticket.  Doug called him an idiot and they got back on the road. 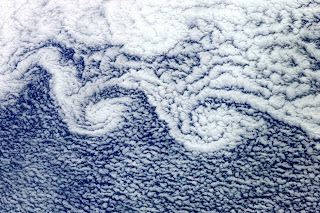 Altocumulus from the ISS

Altocumulus formations usually comprise many individual cloudlets and take shape at heights of 6,500 to 23,000 feet. The whorls visible in this altocumulus layer, as seen from the International Space Station, are caused by two regions of ocean air moving at different speeds.

Posted by Joanne Noragon at 2:36 PM