It occurred to me that the entire post 9/11 generation will never know the thrill of running through airports.  Nor their parents, any more.

I traveled on business in the seventies and eighties, and invariably had to meet my corporate boss, or go straight to a meeting on arrival.  I usually left home in a suit and heels.  I can still hear the click, click, click on the concrete of the concourse.

Once I elected to travel in jeans and sneakers, because I could change at the hotel and get to the restaurant on time.  Sure enough, I encountered my boss’s boss at the connecting airport, who lectured me on the perils of lost luggage and the importance of appearance.  I think he also told me I should always show up ten minutes before my boss and leave after he left.  Does that still apply?

Coming home from corporate once my boss, who was the president of our subsidiary, our director of manufacturing and I lingered in the bar.  Somebody eventually checked a watch.  Not me, never wore one.  The plane was at the gate!  The three of us took off running.  The two of them were men with long legs, but I was holding my own, head down and clicking along.

Blam! Straight into two men coming down the concourse.  In American Airlines pilot uniforms!  They kept me upright and heard me explain the plane leaving NOW!  One of them turned and whistled down the president and the director of manufacturing.  That United flight had left the gate.  However, they would be happy to escort me and my travelling companions to the American counter where a flight to the identical destination was boarding.  The pilots got us on board, and Frank and John and I  got back to Cleveland on time.

There was no direct flight between Cleveland and our corporate headquarters.  Always a connection in Chicago, St. Louis, Atlanta. One time, a Thanksgiving or Christmas, there was a mass of college students crowding behind me at one of those airports, but I was next in line for luggage check.  As I idly glanced at the arrival/departure board on the back wall, my flight went to Cancelled.

I confirmed that at once with the agent, as a deafening din of outraged students behind me roared in protest.  A small young student at my shoulder burst into tears.  “I don’t know how to get home.”  The agent at the next counter called out “I have two seats to Cleveland leaving in twenty minutes.”

I grabbed her hand and dragged her straight down the counter, steps ahead of the hoard that jumped the velvet rails.  The seats were ours. It all happened in ten seconds. 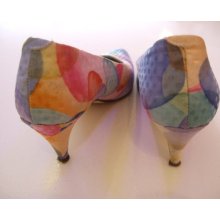 Vintage 1980's court shoes by 'Images'. Made in Italy. All the colours of the rainbow in psychedelic bubbles!

Posted by Joanne Noragon at 1:28 PM