Elaine, at Pear Tree Log, said they plant Mole Bulbs, which deter those little mole buggers.  Always up for a good read, I moved from identifying mole’s trails to how to send them packing.  I learned a couple of things about moles, too.

Moles simply do not live above ground, possibly excepting my hero, Moley, together with his friend Ratty and their acquaintances, Mr. Badger and Toad.  They live in their mole tunnels.  They do not eat roots.  Voles do that.  Moles eat worms and grubs.

When mole tunnels are visible on the surface the little fellows are busy eating Japanese beetle larvae. This all sounds like a good animal to have around. Laura, however, would give them an eviction notice just for eating all the worms she saved. I compromised.  They can live in the rest of the yard.

There are plants that deter mole simply by their detestable, to moles, smell.  Sork, one such, has come to be known as mole plant.  We are one zone too north for another, yellow crown imperalis, but can plant allium and euphorbia lathrys—in the fall.  I have not located a source for mole plant (yet), and am on the nursery’s list to notify when the two bulbs are available in the fall.

In the meantime, a mole mover is available.  Ground up peanut shells saturated with the oils of the aforementioned plants, plus the oil of the plant moles most detest, castor.  At the nursery counter last weekend the clerk explained how to use it.  She tore off a sheet of a note pad, put it on the desk.  This is your yard.  She drew a line around three sides.  This is where you sprinkle the product the first couple of days.  When you see the moles have left—she drew the last line—you close the perimeter.

Hamilton went around the garden with the shells, which don’t smell all that great to people, either, leaving one exit route.  The oils are released by water.  It has rained for three days, including the morning he went around shaking peanut shells around the perimeter of the garden.  It has not stopped raining enough for another application.

Yesterday morning the mound I take to be the escape hatch is right there by the sidewalk.  Hamilton can give the perimeter another dose of castor oil peanuts, then we’ll close off the hatch.  Don’t tell Laura, but we only did half the garden. 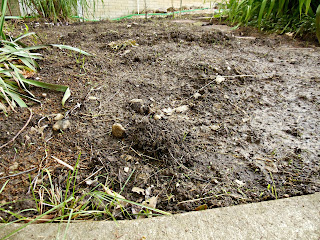 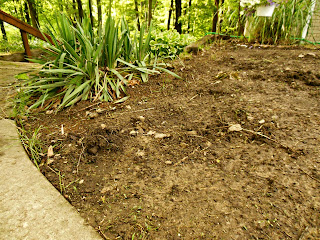 Posted by Joanne Noragon at 8:23 PM