I had opportunity to go by my first school this week, Forest Hill elementary, so I took my camera.  I wanted to see if the rock was still there.

This is the school I went to.  Built in 1926, with art deco embellishments on the building that recognized the Indian trail portaging between the Cuyahoga and Tuscaroras Rivers. 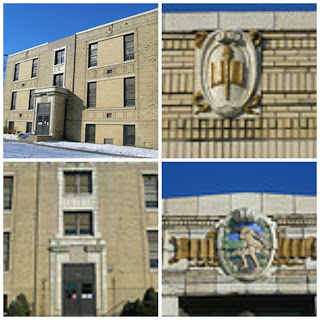 The City of Akron was able to pass a massive bond issue for the purpose of rebuilding many old Akron schools, Forest Hill among them.  In my childhood my school was on the front half of a city block, the play area on the back half.

The new school was built on the back half of the property, where the rock resided.   This is the new school.   I understand some of the art deco is featured inside the building.

The rock remains.  In my day it was closer to the intersection at the corner of the streets; we could squeeze through the fence at the corner to have a go at the rock during the summer time, too.  We spent hours with a small stone and a tin can, chipping gold off the rock.

The school still faces the same direction; the rock remains behind the school.  Now the half a city block playground in front is entirely surrounded by high mesh fencing, with one gate into the parking lot and the main access through the school proper.

We walked around the school on the city sidewalks to reach the stone.  Hamilton and Emily were on my original errand, so they were treated to grandma’s elementary school before they reached home.  As I walked along I realized the concrete pad bordering the sidewalk was the pad for the playground fence, once.  There were post holes, filled in with dirt, I guess, all along the pad. 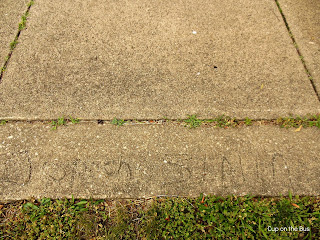 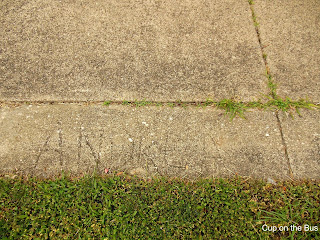 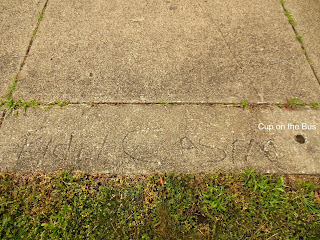 There were names traced in formerly fresh concrete in several of the pads and we could make out most of them.  Here we have Joseph Stalin, Fidel Castro and Andrea.  I wonder if Joseph/Fidel was in love with Andrea, or if she were a partner in crime.  May be the later; she didn’t use her last name. Such graffiti was way after my time; no one knew Fidel Castro’s name when I went to Forest Hill.  Even the sixth grade boys weren’t brave enough to write in wet concrete in the 1940’s.

The old trees remain.  They aren’t on the playground; no one plays under them these days.  But, like the rock, they remain. 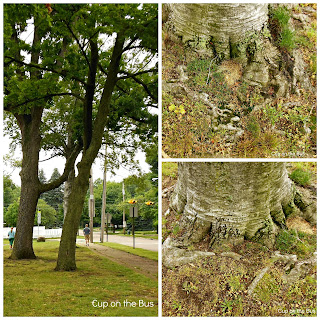 Posted by Joanne Noragon at 8:08 PM