Our road guy who maintains the town hall grounds is, as my grandmother would have said, persnickety about their appearance.  I teased him once about adding soil, raking, seeding, generally grooming the hill that leads to the septic tank cover.  “It needs dressing,” he said of his fussing.    And, it’s no longer a weedy embankment, it’s a small, grassy hill with a large iron cover atop.

You remember Doug, the fellow who’s seen the president’s plane go over, and who helped save Sunny last summer.  At the last town board meeting Doug reported they began to dress Boston Park.

That word again. I know I heard it often as a child, but in today’s world of stripped out communication, it too may be lost in a generation. 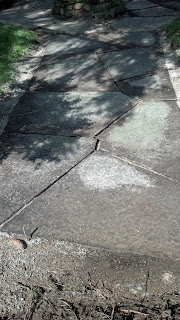 These are being lifted from under years of sod.  There is a large stone planter, almost like a wishing well. 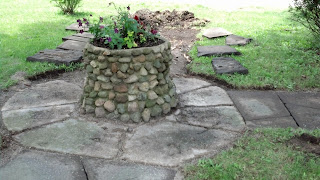 It is an old time vignette, framed by cedar. 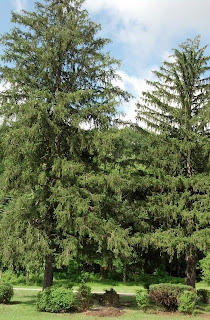 I asked the people I know about the Boston Park, and have an earful of fantastic and fantastical stories.  The stone planter was built by Shy Dickerson.  It was built for Shy Dickerson.  It was built in the 1930’s. The planter used to be a bubbler, fed by a spring up the hill behind the ski area.  The spring was piped down, filling first a stone watering trough on the west side of Riverview, then supplying the bubbler on the east side.  I heard someone up the hill was mad at someone down the hill and used the spring as a latrine, ruining it forever.  I even know the name associated with that story.  When Riverview was relocated a township resident petitioned both the county and the National Park to keep Boston Park intact, and succeeded.

This is all wonderful stuff if you like history.  I do.  Love the stories.  If they aren’t recorded, they’re lost.  And for Boston, it’s a struggle against the National Park, which is rewriting our history.  We maintain a history tab on the township website; the most visited part of our site.  It has languished recently, so I’ve thrown a challenge to the community to write the best history of Boston Park we can and post it on our web site.  Then, pick the next piece of history to save.  Boston Mills, for instance, is Boston Mills.  The Park doesn't get it; they call it Boston Mill, on their fake railroad station that used to be Shy Dickerson’s store and everywhere they mention it.  It’s time to dress Boston Park’s history, too, and then start on Boston Mills. 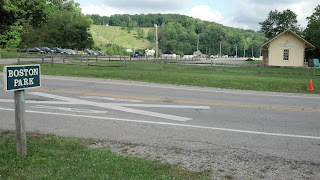 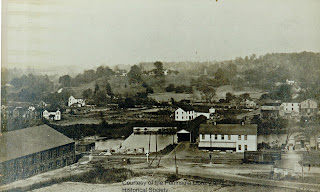 I did not get the date of this picture; it's early 20th century.  There is a covered bridge over the river.  The triangle that is Boston Park is in the foreground, with a wooden road marker cross. 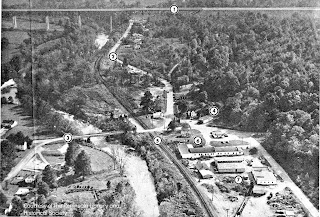 Number 3 is Boston Mills Road.  Number 2 is Riverview Road.  The top of the picture is south.  Use 5 and 6 as the base, visualize an equilateral triangle, and you;ll see Boston Park trees.   This map is 1954. 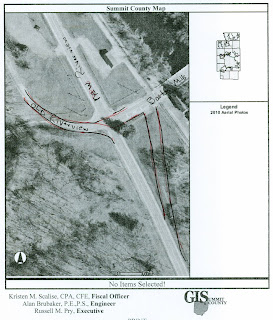 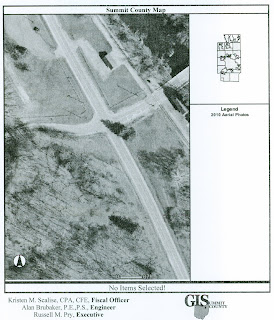 When Riverview was relocated, about then years ago, a resident petitioned both the County and the National Park to leave Boston Park intact.  It was scheduled to become road right of way.  And  it is, but with about four inches of topsoil, a sign that says Boston Park, and a cedar grove in the corner.

Posted by Joanne Noragon at 2:49 PM