I'm down to a nub

It began the usual Monday morning. I was out watering my flowers and enjoying them as much as I can. I think they know I put off moving until September simply to enjoy them. And the phone rang. My dentist office; can I come today instead of tomorrow.

There is a wonky tooth going on. Or, it's my sinuses, complaining about a bad summer. I made an appointment with my dentist to start sorting it out. I worked around leaving for the dentist with an hour to spare, for the thirty minute trip.

Why an hour? I generally get lost and have to call my sister. She has told me over and over, take the 224 exit. I know 224 is a valid route and I drive and drive looking for it, then call maphead (you know, her) and tell her where I am and she gives me directions to go back.

The difference between my sister's driving and mine: I drive by street names and numbers. She drives by landmarks. "Turn at the second McDonalds."

The dentist and I discussed the tooth. It will crap out on me, probably sooner than later. Sadly, it's one of those three legged molars. The dentist, Dr. Nate (they're all young and go by their first names these days), leaned back on his stool and asked "Do you want to have it pulled today?" Absolutely not! I have too much else to do.

I didn't get lost coming home, which included a stop at the post office and the drug store. I had a completely new post office person who took my package, did her keyboard punching and asked "Have you shipped to this person before?" I said No, and just then just happened to see tiny letters at the top of the credit card machine that said Somewhere, IL.

"I do know I am shipping to Missouri" I said to her. She began rubbing her inch long eyelashes even harder, blinking furiously. She voided the transaction, huffed the papers together and into a drawer and began again, directing my package straight on to Missouri.

And so I was home at three this afternoon, bone tired. I still listed the rest of my books, and then had an offer for the vintage milk glass salt and pepper shakers. 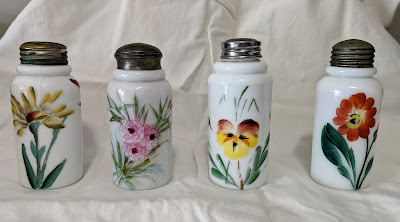 It was a decent offer and I took it. I sent a thank you note for taking them off my hands, and told him the woman who gifted me them told me they were valuable. The buyer responded they were, ten years ago, but the value was down at least 40%.  I'm sure he's right. No question, it's a new world out there.
Posted by Joanne Noragon at 7:29 PM