Three down, three to go

I remember reading a few blogs before bedtime last night. I was cross eyed tired from my day outdoors, at the fair. I hope I refrained from commenting! I did go to bed at nine in the evening and woke a bit before eight this morning, ready to take on a new day.

Grocery shopping has been injured this month. Normally I would shop the last week of June for this month, but Laura was in New Orleans, then had an orientation day at Akron U, then I was at the Peninsula Flea yesterday. Everything was shifted to today. Last night I texted to confirm, and received a pathetic reply: she was sickly and in bed.

I resigned myself to going it alone. I literally was reduced to the last half bag of noodles and quarter bag of frozen corn for dinner last night. For tonight I faced the last can of butter beans. Nothing ventured, however, and I texted Laura this morning. Yes, she was on her feet and would come, wearing mask.

Amidst all the usual palaver, Laura asked my rehoming plans for the cat. She thought Bekka, her oldest sister, would be interested. Later in the day I texted Bekka all the details, and yes with a capital "Y", she would love to have El Gato. I asked her to work out with Laura some convenient time to drive the whole outfit to downtown Cleveland.

There are one and a half show stories to share. At the second show a woman stopped to stroke the towels and was on the verge of buying one when she abruptly changed her mind. "My kids destroy everything!" she exclaimed, and returned her selection to the pile. I picked it up and told her to take it; short of an open flame or a butcher knife, the towels are pretty indestructible. I still use a thirty year old towel. She protested, I insisted, and so off she went with the towel challenge.

This Saturday commenced slowly as usual; we are at the end of the show. But a woman did literally rush up and demanded if I remembered her. Of course I did, and inquired into the state of her towel. She declared it more than satisfactory, and went on to purchase eight towels for her kitchen.

CW commented on the probable model train display hoisted overhead, and I said I would ask about it. No one I could ask came into view over the weekend, so I have a picture instead. I will ask at the next show, and in the meantime, perhaps you can deduce from the picture. 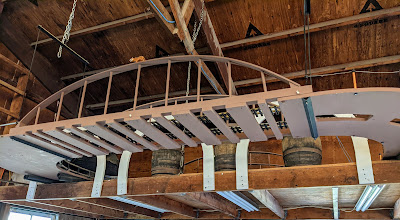 Before the show began, Beth showed me a fabulous purse she had purchased in the Shenandoah's, on their vacation earlier in June. The purse is exactly my style, and I embarrassed myself assuming it was for me. That past, I could only exclaim on its loveliness and utility. All the little circles are rolled leather strips. 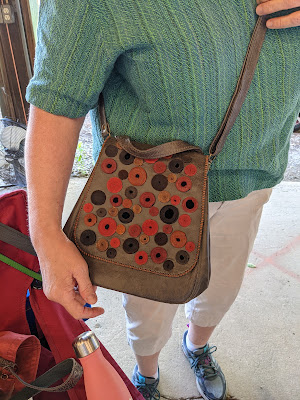 And that's it for another show. Done now until the first Saturday of August. Off to weave more towels.

Posted by Joanne Noragon at 3:34 PM