Toby just left, on Laura's lap, bound for Becca's apartment. Becca is my oldest grandchild, the first, born on the last day of September, almost thirty years ago. She doesn't appear often; she came well before my blogging days. When I had custody of her siblings, Becca was legally an adult

Finding Toby a new home is a lovely win-win-win. I am so allergic to cats (and to dogs) that having one for a pet is not fair to the pet. They are exactly that, pets, and entitled to, as my cat-whisperer brother used to say, being fussed. And I can't. Petting or grooming a cat means, first I cannot breathe, and last, my lips swell to half again as large.

Technically, Toby is my cat. I'm the person who picked up his little four week old self in a parking lot in Pittsburgh, Pennsylvania, and transported him back to Ohio. He literally inhaled his first meal of wet kibble. When he went to the vet the next day he weighed just four pounds, which put him at four weeks old. I always told him his mother left him behind because his legs were so short. 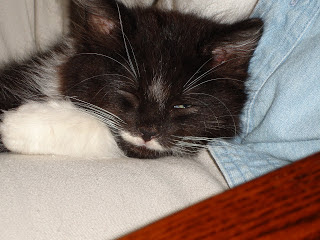 He befriended our two cats and two dogs. Then there were my three grandkids added to the mix, and Toby did not suffer for hands to scratch his ears. When I moved with the girls to the trailer park, "my" cat came with us. But his last two years have been pretty bleak. He knows who among my visitors will fuss him up, and he doesn't allow them to leave without at least one good petting session.

And so we could have carried on for a good long time, except I'm moving again, this time to a house with a Coton de Tulear.  (I borrowed the picture from the internet.) 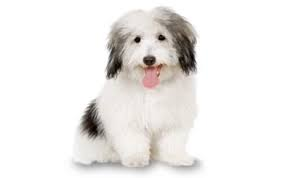 Toby and the dog have met, and it was not happy. It happened when I was in rehab for my shoulder repair, and the grown ups did not know how to introduce cats to dogs and vice versa. I could get the job done, but there is a better solution for Toby. A cat friendly home.
I told Laura I would be rehoming Toby. And my grandchildren, who have known and loved Toby since he was that four week old kitten, put their heads together. Becca wanted him, badly. I said "OK, let me know before the end of September; I'll drive him up to Cleveland."
My phone rang today; Laura, it announced. "Gramma, I'm at Becca's and we're cleaning her apartment for the cat! Can she get him tonight, when she brings me home." 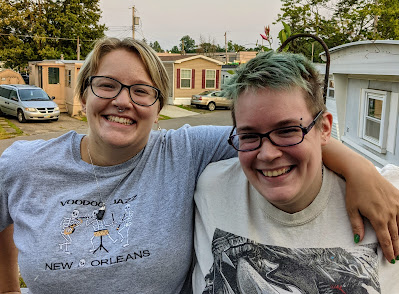 They arrived at eight p.m. and made a Toby sweep of the house. Everything was loaded into Becca's cute little car. 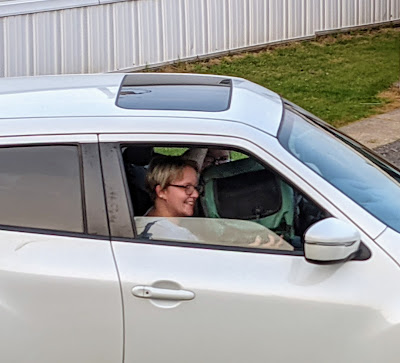 "Wave good-bye, Toby." And so he's off, to live in the clean apartment of a nice young woman who will pet him every day.
Posted by Joanne Noragon at 9:57 PM