Such a nice day

Today is my oldest daughter's birthday, though she has not yet made her arrival. During that pregnancy my mother-in-law said she dreamed I was having the baby, woke up and looked at the clock and it was 8:30, so the baby would arrive at 8:30, though she did not know morning or evening. It was spot on 8:30 pm, and you can bet I did nothing to influence it; I just got on with having her. So, it's a good day from the outset.

The eBay venture is going well; I went to the post office today with sales as well as a towel order. My post office clerk likes to squeeze the packages and chat about "you weave towels!", so the new packages are a new source of conversation. So far I've only asked my neighbor for help with a package once.

Not too long ago I sent my daughter an email with a picture: 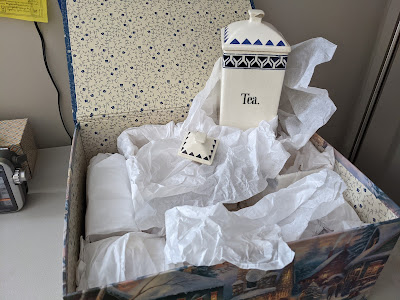 I asked if my granddaughter might be interested. This was truly a stab in the dark; I've never known Caroline to have much interest in "family heirlooms", though she is an avid student of history. I didn't much fancy packing these up to ship anywhere, pending an eBay sale. I have seen sets younger than the one in the box on eBay with an opening bid of $300, so apparently they are of interest to someone.

And today I had an email from Beth: she loves them and will be thrilled. I'm not kidding, tears sprang to my eyes. 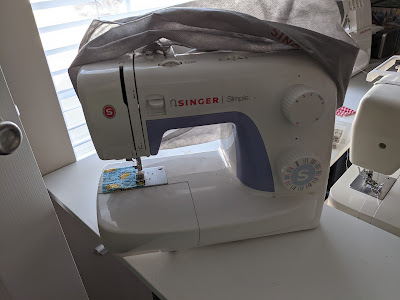 Think I can't get much luckier? Kamaria texted me she is working hard to have my new "loom room" cleared by mid August. When I asked her a while ago, hoping to coincide with the shipment of thread, she didn't know, pointing out that's exactly when all the "children" go back to college. Her two boys and Laura. I'm not going to hang my hat on that, but it's nice to know it could happen.

Posted by Joanne Noragon at 7:05 PM