Laura is in school five days a week, living in a dorm and working on her future. She is planning on being a Resident Assistant in a year, thus having her dorm fees paid. She still looks the same, and talks the same, and is only about two days a week. I am having difficulty coming to terms with not finding her between weeding jobs.

I did make a bit of lemonade from Brassard et Fils vacation schedule. The end of the warp is near; I'm weaving it off in natural. The plant goes back to work on August 2nd, and my thread order is in, so I assume it is one of many that will be packed and shipped that week.

I realized the three weeks between now and then would be good to do some staging at 61. I want to get my living room rug down in my intended studio before the loom goes in. That will keep the loom from sliding about on the hardwood floor, necessitating some kind of mechanical stabilization.

After the rug, the loom should be moved. It will be more difficult than the first move, more tight turns. When it came into this trailer, even though it came up steps and over a rail, it only required the removal of the treadle cross member. I know much more disassembly will be required this time. Taking pieces off the loom will be much easier when it's empty; so I'm weaving as fast as I can.

Having identified all the moving parts of this plan, the only bit of extreme concern is selection of someone I trust to move the loom. John, the master house builder who moved it last time, is the first on my list. I have a call in to him, but haven't heard back yet.

My living room is full of empty boxes. With so much time between now and September, it seems foolish to seal things into boxes and then need them. And, I kept fooling about with EBay, trying to screw up courage to sell some of this stuff.

Finally I did, and listed my camera first. I am so grateful for all the experience I accumulated twenty years ago, when I sold the baskets and blankets my grandparents brought back from their great trip west in 1936. Every trick of the trade to part me from them before the auctions ended came down the electronic path to my inbox.

How EBay has changed in twenty years. Before there was a bid on the camera, there were offers to buy. I turned them down. Now there are bids. Watching the bidders sort each other out is so amusing. So, I put up my college alarm clock. It's actually one hundred years old.  I located a repair date of 1922. Pays to be the granddaughter of  a horologist. Bids have begun. 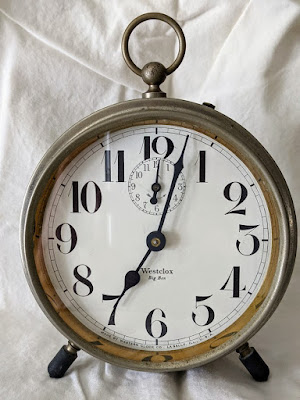 Life goes in, in the midst of empty boxes filling the living room and auctions running on the internet and plans coming together or not, properly or not, perfectly or not.

Posted by Joanne Noragon at 1:53 PM