We flew to Wisconsin for Christmas, to spend time with Ann and Pat. I went to a month before Christmas to book tickets. I toyed that long with the possibility of driving, after realizing there no longer is a direct flight from Akron or Cleveland to Milwaukee.

As I sat diddling with the screens, weighing a layover in Charlotte, Detroit, or Chicago, the price went up a hundred dollars. Flash, just like that. A hundred bucks. My finger twitched, and we were on American, laying over in Charlotte.

I made a mistake booking an 11 a.m. flight, not an 8:30 a.m. flight. There was little freeway traffic, no airport congestion. The flight was seven hours, including layover. Driving would have been exactly the same, including the distance from the airport to Ann’s house. A direct flight would have been two to three hours.

Speed at the airport would have been significantly diminished without the wheelchair. Wheelchair service seems to have become a standard airport business, since I had that stroke eight or nine years ago, and waited twenty minutes for the pre-ordered chair to arrive at the gate.  Now the one I order is there, or hustling on up. The best thing about chairs is, they go to the head of the line, or better yet, to the TSA gate, where there is no line.

When we left Milwaukee for home, Wednesday night, Laura’s boarding pass announced TSA Precheck. The counter agent looked at it several times, then said Laura had been randomly selected.

Our baggage was scanned, and Laura was summoned back from the seating area. The agent asked her to open her suitcase and show the bag of round objects. Hamilton’s bag of jelly beans was examined front and back, and she and our luggage were excused.

The chair only takes me to the head of the line. I used to set off two alarms, my titanium hip and my titanium neck. Now my new shoulder rings another bell, and eight or ten inches of new leg metal rings a lot of bells. Miss Prechecked sat and waited.

At the gate, a new gate was announced. At the new gate, a new time was announced. Heavy weather on the coast was delaying incoming flights, and one of those, from Charlotte, was our connecting flight back to Charlotte, then to Akron.  I explained the problem of missing the flight out of Charlotte, and was told it was raining so hard there, we would do more than miss the flight. The ticket agent offered us a bus ride to Chicago O’Hare to connect to Akron.

The agent assured me there was more than enough time for a bus trip from Milwaukee, Wisconsin to Chicago, Illinois, to catch the last plane to Akron, including four detours off the interstate to pick up passengers. She was correct; we reached the counter with ten minutes to spare.

There was no plane at the gate; it was late from Charlotte. But, it did arrive, and we were home and in bed by midnight, only an hour late, and, according to Ann, just a mundane adventure later. 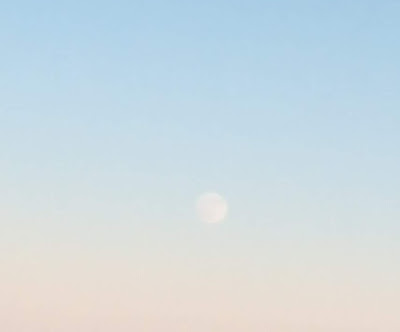 The newly waning moon, through the airplane window, above the rain from the coast. I still need to call American and see if there is a refund for the difference between bus fare and air fare.
Posted by Joanne Noragon at 5:57 PM