Laura is taking finals this week, Friday we go by plane to Wisconsin for Christmas, and this morning I put a number of towels into the mail. I began at the top of my reading list, “An English…”, and now I’m into the D’s. My spreadsheet filled in eighty at “Dartmoore Ramblings”. I need more export declarations and neglected to get them. I’ll stop tomorrow, after cards.

There are six towels left of the current weaving; two are spoken for and the other four have a high probability of clearing the shelf this week as well. The entire run of lavender is done, six towels on the beam; “peacock” (I didn’t name it) is on the bobbins and ready to go. There are 54 towels so far from the last warp I wound on and about fifty to finish it. 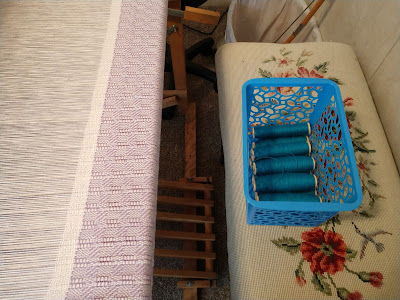 Laura and I are seriously on the outs this week. Well, she is. I don’t walk in her shoes; they’re her issues to resolve. Her responsibility to resolve. Of her siblings, only one was a self starter. Sigh. I’ve reinstated my brilliant phone policy; from six to six it lives in my room. There was no plug available for her charger, and rather than asking me which of my devices might be changed, she thumped her phone on the shelf and left. I grinned. 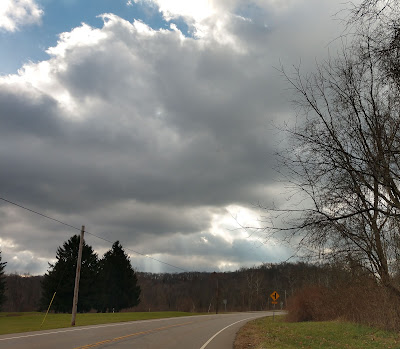 Our weather is winter grey, and there’s an edge to the breeze. But, it has been unseasonably (?) warm, bar that snow and ice storm a couple of weeks ago. It looks to be warm past the end of the year. I’ll take it all. It makes getting around easier. My last several trips to the post office, with my shopping bag of envelopes of towels, patrons have been handily close to the door and happy to help. This week I was completely alone. In fact, Lynn and I chuckled that on their anticipated busiest counter day of the year, I walked into an empty post office. 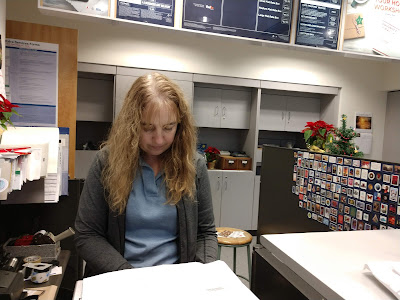 Not to worry, in short order they streamed in behind me. And, their arms were so full I stopped a couple of folks from attempting to dangerously re-juggle their loads to get the door open for me. In fact, I held each door open in turn for more coming in.

Posted by Joanne Noragon at 2:10 PM