Three years on the road

I went to lunch yesterday with a friend, just down the road to Fisher's. It's so much quieter than the Lizard. This bicycle had our attention. 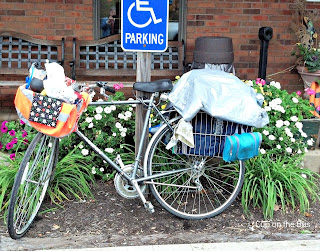 I said it looked like a homeless person's shopping cart. My friend, an avid cyclist, said no, but it seemed the owner was travelling. "Look at the washcloth."

And then, there she was. Seated, in spite of the brisk breeze and cold, at a patio table, keeping an eye on the bicycle. 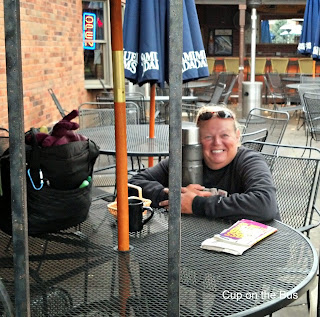 We stopped and exchanged some pleasantries, and yes, she and the bike went together. Where from? San Diego. I know I made incredulous sounds. How long on the road? Three years, six months off here and there.

My friend said a cross country bike trip was a dream of hers, but amassing the equipment was just a daunting task. Our cyclist said if she had waited to do that she would not have crossed the street.

She asked if we knew of a hostel she could put up at for the night and have a shower. We didn't, but sent her across the street to Century Cycles, the best bicycling information around, I'm sure.

Oh, and where was she going? She would be stopping wherever she was closest to the Canadian border.

We wished her God speed and very safe travels and went on into the nice warm restaurant. Of course we picked up her tab.

Perhaps you recall a year ago June I met a solitary biker, leaving Lockport, New York, going to California.

Canada is a stone's throw over the canal from Lockport. She can take the Peace Bridge, right there in Buffalo, New York. Coincidences in a small world.

Posted by Joanne Noragon at 8:08 PM