How I manage technology

I do manage technology, but incrementally.

I push some virtual things too hard or not hard enough, too quickly, too slowly. When all else fails, I hand the offending device to someone who knows more, to make it work. Generally a grandchild.

Some applications are too big to understand.  I am past believing “it’s intuitive.” That’s mean geek speak for “you’re too old, give it up.”

To install and initialize a really big application I read the manual. I read the internet.  I may try a couple of YouTube videos. But in the end the instructions must be condensed to one page, step by step, with soothing phrases interspersed: “when you have done that, a green light will blink, and you are ready for the next step.”

If my instructions do not make me comfortable, I drag the piece of technology to someone I’m sure can help. Recently it was my car. I dragged it to the phone store.

I’m no stranger in the phone store. I’ve occasionally put my phone on the counter and intimated a replacement might be in order as the damn thing no longer works. “Did you try soft reset?”

That means hold down volume down. Then add on/off.  And hold and hold and hold and soft reset begins and solves everything. I wrote the instructions in little letters on a slip of paper and taped it to the back of my phone. 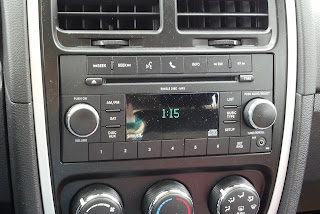 Then I got a new car. New to me. With a phone icon in the panel. I could ignore it forever, except the car knows I have a phone and tries to answer if it rings in my pocket. Complete confusion.  I went to the phone store and found Calvin. Named for Calvin Coolidge, thirtieth president of the United States, and proud of it. Now that’s a twenty something to pay attention to.

Calvin “synched” the phone with the icon. Don’t ask. Now a nice lady tells me I have a call and push the synch. That means push the phone icon. I do, and my caller and I chat away on the radio. Lovely. If I am on the phone when I get into the car, the car takes over the call. When I get out of the car, I must get my phone out of my pocket to continue the call. It all works.

Calvin said I could come back and he would synch the button that calls out. I have to teach it to call Ann if I say “Call Ann.” Too much, that will never happen.

There was red everywhere around me yesterday, and I had my camera. But it was out of battery! I took all those pictures with my phone. I have learned to send the pictures to my pc email account, then save them to my editing program.

Even sending all those pictures only four at a time, I could not receive them. I spent several hours, and accomplished nothing when I left to get Hamilton at noon. We stopped on the way home for the picture of the crows at the three red maples. Nothing from earlier in the morning had arrived in my email account when I looked after lunch.

I called Calvin. Even simpler than soft reset. The USB that makes the charging cable into a wall plug—pull it from the plug, stick it into the computer and the other end into the phone. Oh, and turn the phone on.  The computer offers a choice of several programs, one of which was my photo editing program and I clicked on through just like it was my camera. 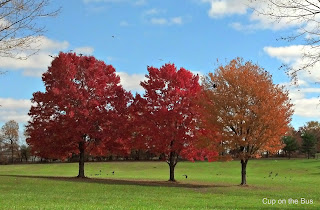