In the research I did last summer for Boston Park I could not come up with a satisfactory explanation of the stone planter. I eventually concluded it was built to protect the water pipe in the park. My only evidence for that is a picture I did not use because it could not be reliably dated.  It showed two automobiles foreground, probably from the 1930’s, and a small wooden enclosure on the edge of the park, with a pipe extending from one side. 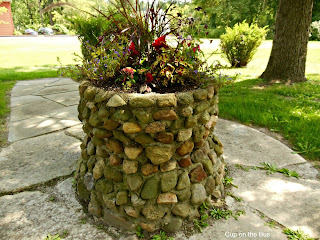 A picture from the early 1950’s shows the stone planter in the same location, without the pipe. There is no community recollection of the water pipe at that date, either. For the little history I surmised the stone enclosure protected the pipe, further evidence being the sandstone surround, probably to keep the ground from being muddy. When the spring feeding the pipe was contaminated the stone structure became a planter. A logical continuum, but unproven.

I put every construction of folk art rock structures into Google to turn up an explanation of the origin of the little planter.  I've seen a thousand variations of rock urns and folk rock, but not a clue about the art form or movement behind this planter. I did turn up a homestead built entirely of stones, full of whimsical stone forms and creatures now open to the public on the death of the creator. Not a hint of how he was inspired. 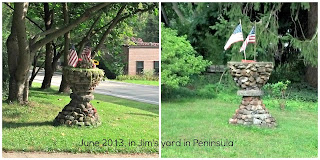 In town there is a house with two rock urns in the yard. Aha, I thought, when I first wanted evidence. I will just ask Jim and have the story. He’s an octogenarian and a lifelong resident of the town. He’ll have all the answers. Jim bought the house in 1940, he told me, from the original owner, who built it in 1900. The urns were in place in 1940; he figured the previous owner built them, but knew absolutely nothing else. Except, they held flowers and flags well in summer. 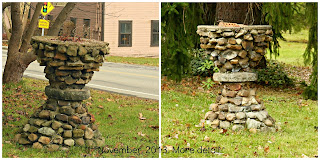 All dead ends; I’d probably never know. Was this a project in Popular Mechanics? Or one of the newspapers back in the twenties or thirties, like all the quilt top patterns women accumulated and made? I’d never know.

Turning the pages of the last Township News, I stopped short. There was another stone urn, pictured in a story about the Fiscal Officer and Road Super of Perry Township refurbishing the arch to their township cemetery as a surprise gift to the township trustees. I found the phone number and called in a heartbeat. The Fiscal Officer had not received her magazine yet. We had to sort through the confusion; the urns they replaced atop the arch? Those came from the hardware store.

No, no, the urn on the grave. She found the article on the internet. Oh, that urn! It was on the grave of the man who donated the land to the township, back in the 19th century. He died before the turn of the century. She had no idea who built the urn or why.

I would love to hear from anyone who knows of this folk art that seems to be built from fist sized rocks, a small mill stone, some concrete and some spare time. The urns, Jim’s and the one in Perry, could well have been built about the same time. Were they isolated ideas, or already in the popular culture.

The urn examples, in a Perry Township cemetery and Jim’s yard, are about 250 miles apart, or the other side of the world in 1900 farming communities. The pipe surround in Boston Park, a different shape, is a logical extension of the urns in Jim’s yard, plus the stones and concrete. Someone had seen them and could do that when the original pipe housing in Boston Park needed replaced.
Posted by Joanne Noragon at 3:26 PM