How to spin milkweed


In the fall, on the way home from school, did you ever pick a dried milkweed pod and break it open to release the last few bits of silk.  Or open one too early and find all the seeds inside, looking like a scaly fish.  The sticky mess on your hands…

That would be the extent of my milkweed encounters, had I not learned to spin fiber into yarn.  I learned to spin wool first, and a fair amount about sheep breeds, shearing, skirting, microns, twists per inch.  I believe I next tried flax, and you do not need a distaff to spin flax, in spite of what you may have read in Sleeping Beauty.

I spun cotton, of course, back in the early and mid eighties, when natural and naturally colored fibers were being popularized among spinners by fanatics searching them out and growing them in our southwest.  Like so much of our modern lives, cotton is standardized to a few varieties, eliminating all the wildly occurring strains known to spinners probably up to the industrial revolution.  Here’s a staggering thought:  until the industrial revolution, every thread woven into every sail in every navy in the universe was spun by hand.  That includes the navies of the American Revolution.

Spinning fiber into thread is pretty neat.  I looked for fiber to spin.  I’ve proven you can spin dryer lint.  I’ve spun the cotton wadding in aspirin bottles into decent yarn.  It’s mostly synthetic stuff.  My cats were not safe, but I didn’t have a decent long hair cat during my spinning days, and the short hairs were not fine and soft enough for the yarn to be decent.

I spun a lot of dog hair, mostly due to knowing several Samoyed owners who would “just die” to have a sweater knit from Duke. Or Snowball.  I also finished one project by knitting the sweater for the customer, too.  He wore it ice skating.  According to his wife, several turns around the outdoor rink and her husband went down like a felled tree.  He lay on his back, unconscious.  Paramedics arrived, and one stripped off the sweater.  Steam billowed up.  He was treated for heat stroke, and recovered to skate the rest of the night.  Without his Samoyed sweater.

First problem—find a stand of milkweed when you are no longer seven years old, walking home from school.  I looked along the meadow trails of several local parks and found lots of milkweeds, no pods.  This was before internet.  I spent an afternoon researching milkweed in the library, and learned they probably are the dumbest plant on the face of the earth.  Some plants are male, some are female.  It still takes two to tango, and if a stand of milkweed does not have girls as well as boys, there will be no milkweed pods.

When I spotted a huge stand of milkweeds in a vacant field next to a local car dealership, I pulled right into the lot, told several salesmen I was not there to buy a car and headed off into the field to harvest just ready to open milkweed pods.  Know how you pick a couple of tomatoes in the garden and put them in your shirt to get them to the house.  I probably should have been arrested for indecent exposure back at the car, but I escaped the salesmen and drove home with my stash.

How to work with it?  I opened the first pod in the living room.  The air filled with hundreds of silken parachutes.  The cats looked at me with suspicion.  I had young grandchildren capture them best they could, and rethought the project.  I opened the next pod in a bag and carefully extracted a few bits of silk.  Almost impossible to hold, but I was able to produce possibly an inch of thread as I twisted the fragile silk and removed the seeds.  By the end of the first pod I had less than a foot of thread for an hour’s hard work.  I set it aside.

Weeks later I mentioned my project to another spinner.  She looked at me incredulously.  “But, milkweed is a bast fiber.  Just like flax, you open the stems and process the fiber inside to spin into thread!”  I knew that. 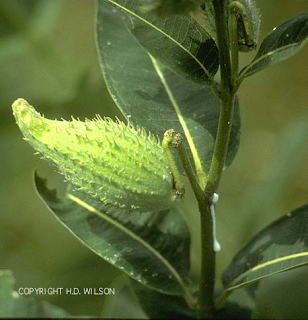 Posted by Joanne Noragon at 3:54 PM